Menu
Home Opinion How did protesters get into the “other room” in Sri Lanka?
Opinion

How did protesters get into the “other room” in Sri Lanka? 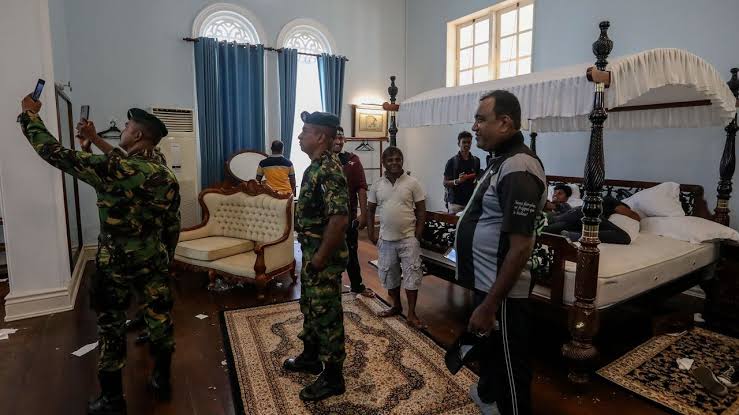 Apparently, soldiers of the presidential guard allowed them in.

President Gotabaya Rajapaksa, a retired army officer who was elected into office by an overwhelming majority in 2019 is currently cooling his heels in exile.

Thousands of angry protesters had recently taken over the capital, Colombo with hundreds branching out to the presidential palace. They chased out the chief tenant alongside the main occupant of his “other room” to Singapore.

Sri Lankans had had enough of mis-governance and excuses by a notorious cabal of family and friends.

Next question: Can it happen here? The answers are, Yes and, No.

Yes, because there is already precedence as claimed by Dr. Nowa Omoigui in his must-read, Palace Coup of August 27, 1985;

“At Dodan Barracks, four young Majors were detailed to arrest the Head of State. They achieved this without much ado. Meanwhile, the official premises of the Head of State was ransacked and Buhari’s belongings looted by soldiers.”

No, because Farooq Kperogi puts it in, Why Buhari is Wildly Popular in the Muslim North;

“No amount of logic, evidence-based reasoning, economic hardship, etc will make the littlest dent on Buhari’s popularity in the Muslim north.”

The veracity of Kperogi’s insight was validated by the North’s lackadaisical response to the EndSARS protests of October 2020. However, by December 2021, Prof made a confessional in, Only Buhari’s Switch to Christianity Will Nudge the North.

Agreed, Sri Lanka is not Nigeria despite having similar problems of frequent blackouts, exorbitant fuel costs, mounting debts, galloping inflation, and ever-increasing slide of the national currency against the US Dollar.

It is an island nation of 22 million made of a majority Sinhalese at 75% of the population who are predominantly Buddhist. The most significant minority at 12% are Tamil mainly Hindus.

Ironically, the original inhabitants, Vedda are at a mere 1%. Then the Burghers (Mixed-race Europeans) and Malays make up 2% of the nation.

In the overall context, Sri Lanka is 10% Muslim and 8% Christian.

The Moors in Arabic named the island, “Serandib” from which the English crafted the word, “Serendipity” which means, to discover by chance in a happy or beneficial way.

The biggest challenge for any mass protest in Nigeria is the religious divide. Our partisan ruling classes have become very adept at deploying that divide and rule maneuver to near perfection whenever the political temperature rises.

Take, for instance, the ongoing furore over the Muslim-Muslim ticket of the ruling APC. We are hardly keeping our eyes on the ball concerning the fundamental issues of governance, the economy, and security matters.

However, hunger and insecurity are not limited to any ethnicity nor peculiar to any particular faith as we have clearly seen in Sri Lanka. So, never underestimate the power of accumulated backlash and the culmination of blowback.

Then there is the sudden eruption of frayed nerves. And eventually, the God factor.

“Turning and turning in the widening gyre

The falcon cannot hear the falconer;

Mere anarchy is loosed upon the world,

The blood-dimmed tide is loosed, and everywhere

The ceremony of innocence is drowned;

The best lack all conviction, while the worst

Are full of passionate intensity.

Surely some revelation is at hand,”