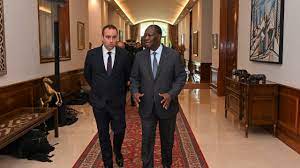 He met Ivorian President Alassane Ouattara in Abidjan on Saturday.

Lecornu is on a visit to Ivory Coast after a stop in Niger to discuss “the security situation in Africa, particularly in the Sahel-Saharan strip.

France’s relationship with Ivory Coast dates back to the colonization period and the former has had good relations with the West African state.

France is strategizing a fresh in West Africa after its fallout with Mali with the Barkhane forces meant to weed out the Jihadists in the region.

Under Macron’s orders, the massive pullout should be completed by summer’s end.

By then, Barkhane, which counted 5,100 personnel in the Sahel at its peak, will have “around 2,500” in the region, the operation’s commander General Laurent Michon said in an interview this month.

France is now reorganizing its troops in Niger to help in the fight against Jihadist attacks in the region.
(Africanews)