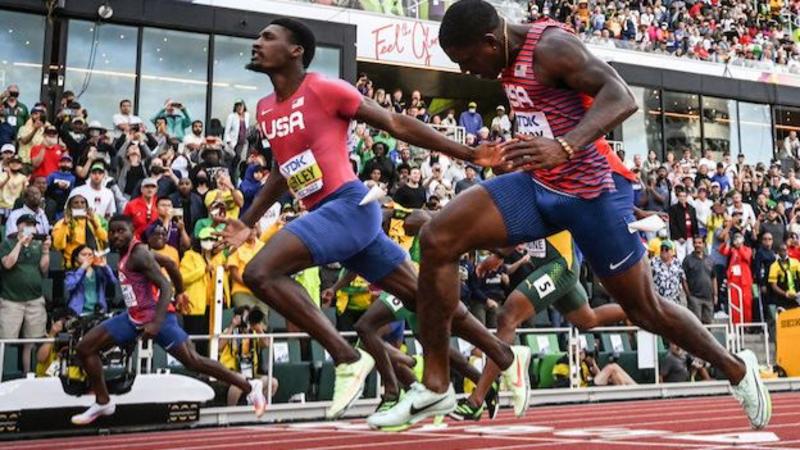 The 27-year-old, who won Olympic silver last year, won in 9.86 seconds as Marvin Bracy edged out Trayvon Bromell for silver on reaction time in Eugene.

It is the first time any nation has won all three medals in the world 100m since the United States in 1991.

“I know today opened up many doors for me,” said Kerley.

“The future is bright for me.”

His silver-medal winning performance in Tokyo came on his major championship debut over 100m, and less than a year later, he is world champion.

On Friday, he set the fastest heat time ever recorded in World Championship history with his 9.79 second effort, but left it late in the final to dip over the line 0.02 seconds ahead of his compatriots.

The last US clean sweep of the 100m podium came 31 years ago and featured Carl Lewis, Leroy Burrell and Dennis Mitchell in Tokyo. Lewis led the previous occurrence, alongside Calvin Smith and Emmit King, in Helsinki in 1983.

“This is history, to be part of something that has only happened three times ever just means the world to me.”
Jamaica’s Oblique Seville, the fastest qualifier for the final, was fourth while American defending champion Christian Coleman placed sixth in what was his first major final after his whereabouts suspension.

He received a two-year ban in 2020 after missing three drugs tests, meaning he could not compete at the Olympics.

The champion in Tokyo, Marcell Jacobs, earlier withdrew from the 100m before the semi-finals after experiencing tightness in his right thigh.

The Italian, a shock winner at the Olympics last year, has struggled with a thigh injury this year and finished second in his heat on Friday.

A statement by the Italian team doctor said Jacobs competing would “put muscle integrity at risk and lead to injury”.

“A painful choice, I am forced to stop,” Jacobs said on Twitter.

“I am a fighter and this is why I decided to be in Eugene. Now, in order not to compromise the rest of the season by risking a more serious injury, I have to postpone the challenge. I promise, I will do my best to make you dream!”
Gidey upgrades silver to gold
Earlier on day two of the championships, Ethiopia’s Letesenbet Gidey held on to win gold in the women’s 10,000m.

Gidey, who won silver at the Doha worlds in 2019, led going into the final turn and narrowly held off her rivals in the kick for the line before finishing in 30 minutes 09.94 seconds.

Kenya’s Hellen Obiri (30:10.02) and Margaret Kipkemboi (30:10.07) were second and third respectively, while defending champion and Olympic gold medallist Sifan Hassan, of the Netherlands, was fourth in 30:10.56.

Poland’s Pawel Fajdek won his fifth successive hammer title with a world-leading throw of 81.98m, while China’s Wang Jianan took men’s long jump gold with a jump of 8.36m on his last attempt.

Before Kerley’s victory, Chase Ealey won the United States’ first gold medal of the home championships in the women’s shot put, a best throw of 20.49m earning her a first major title.

In the men’s 110m hurdles, American Grant Holloway (13.14) was the fastest qualifier but Daniel Roberts, who won the US trials and is the third-fastest man in the world this year, failed to advance from the first round after hitting a hurdle and falling while in the lead of his heat.

“I was really ready to go, maybe I got lazy with it,” said Roberts. “It’s really disappointing as I came here to win, not just to get a medal.”

Cherono was down to take part in the men’s marathon on 17 July, while Ross was scheduled to compete in the 400m heats on the same day.

The AIU said Cherono, 33, had tested positive for the prohibited substance trimetazidine from an out-of-competition test on 23 May.

It said the athlete “was notified of the adverse analytical finding when he arrived in Eugene on 14 July”.

The AIU added: “In accordance with the rules, the athlete was provided with an opportunity to show cause to the AIU why he should not be provisionally suspended.

“Having considered the submission of Mr Cherono, received late on 15 July, the AIU has determined that a provisional suspension should apply with immediate effect and Mr Cherono will not take part in the marathon on 17 July.”

The AIU said Ross, 21, was banned for allegedly “tampering with the doping control process”.

“The allegation arises out of the athlete’s conduct during the course of an investigation into a potential whereabouts violation,” said an AIU statement.

“There was an unsuccessful attempt by the AIU to test Mr Ross on 18 June, 2022 and the investigation into this matter concluded when Mr Ross was interviewed by the AIU in Eugene on 14 July.”
(BBC)

Nigerians should be grateful to God, despite the country’s current challenges – Buhari