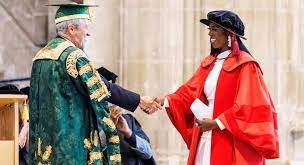 Nigerian music star Tiwa Savage has bagged a doctorate degree from the University of Kent.
The mother of one who completed a degree in Accounting at the University was awarded an honorary degree during its congregation ceremonies at Canterbury and Rochester cathedrals.
“Tiwa Savage will be made Doctor of Music in recognition of her inspirational and international career in music.”

The music star joins the list of Nigerian celebrities who have been awarded doctorate degrees from foreign universities.

Other celebrities who have bagged doctorate degrees include Peter Okoye, dancer Kaffy and Alexx Ekubo.
Okoye and Kaffy bagged their degrees from Escae-Benin University, Benin Republic.