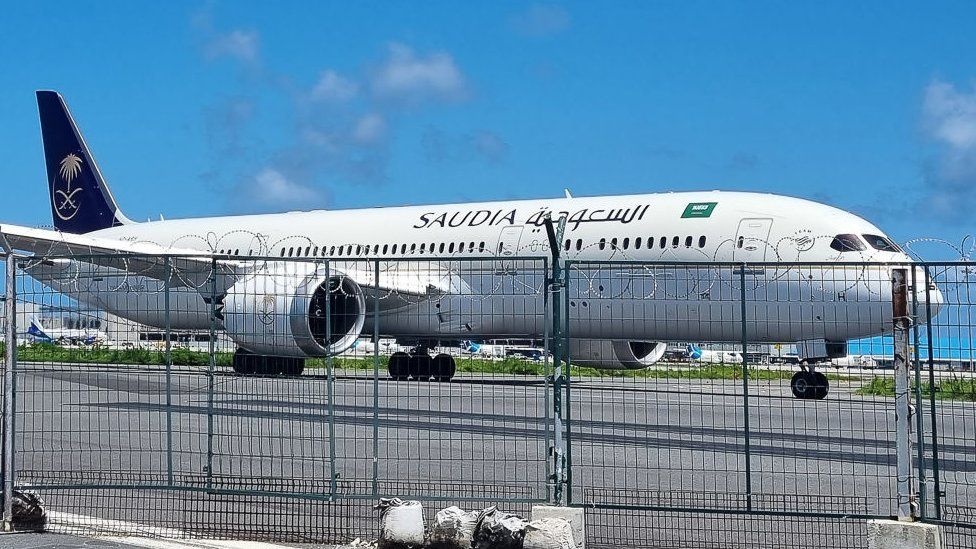 Sri Lankan President Gotabaya Rajapaksa has arrived in Singapore on a flight from the Maldives, where he fled after mass protests over his rule.

Singapore’s government said he had been “allowed entry on a private visit”. It is not clear if Mr Rajapaksa will stay or move to another destination.

He pledged to resign by Wednesday amid public anger over the island’s economic crisis, but has failed to do so yet.

The cost of food, fuel and other basic supplies has soared for Sri Lankans.

The president fled to the Maldives on Tuesday night on a military plane and there has been much speculation about his plans. Reports say he took a Saudi airline flight, accompanied by his wife and two bodyguards.

“He has not asked for asylum and neither has he been granted any asylum. Singapore generally does not grant requests for asylum,” Singapore’s foreign ministry said, confirming he had landed.

The leader, who as president enjoys immunity from prosecution, is believed to have wanted to leave Sri Lanka before stepping down to avoid the possibility of arrest by an incoming administration.

Acting President Ranil Wickremesinghe on Thursday imposed a curfew for a second day. His government ordered a curfew from noon (06:30 GMT) to 05:00 Friday to quell protests.

The streets of Colombo were calmer as anti-government demonstrators began leaving some of the official buildings they had occupied.

“We are peacefully withdrawing from the presidential palace, the presidential secretariat and the prime minister’s office with immediate effect, but will continue our struggle,” said a spokeswoman for the protesters.
Mr Wickremesinghe was appointed acting president by President Rajapaksa after the latter fled – but the decision triggered further protests demanding the PM also resign.

One person died and 84 others were injured during Wednesday’s protests, which took place at key landmarks around the capital, Colombo, including the prime minister’s office.
Many are asking where Gotabaya Rajapaksa is planning to flee to next. But perhaps the more important question is: who will let him stay?

It is unclear if Singapore is a transit point on the way to the Middle East, or if he intends to stay in the Southeast Asian island, and if so, for how long.

The rich city state has in the past played host to controversial figures such as Thein Sein, Robert Mugabe and Kim Jong-un. But harbouring Mr Rajapaksa for the long term is likely to be a line they will not cross.

This is a man accused of war crimes, under intense global scrutiny right now, having gone on the run while his country slides into economic collapse. The international criticism that Singapore would receive would not be worth it.

Authorities would also have to contend with the backlash from the Singapore public, which in recent years has become more vocal and assertive.

The country also has a significant Tamil population, some of whom are of Sri Lankan heritage. Mr Rajapaksa is accused of allowing the deaths of tens of thousands of Tamil civilians during the civil war while he was defence secretary.

Many Tamil Singaporeans would be made furious by his presence, which would in turn rock the peace that authorities have painstakingly maintained.

In short, the longer Mr Rajapaksa stays in Singapore, the bigger the headache for authorities. And it may be a headache they would rather do without.

Presentational grey line
Major demonstrations since April over the country’s economic crisis escalated after protesters broke into the presidential palace on Saturday and set fire to the prime minister’s private home.

On Wednesday, police fired tear gas at protesters attempting to break down the gates of the prime minister’s office in Colombo, before finally forcing their way in. They later headed for parliament but did not get in.