How an organized minority can become a political majority in Nigeria 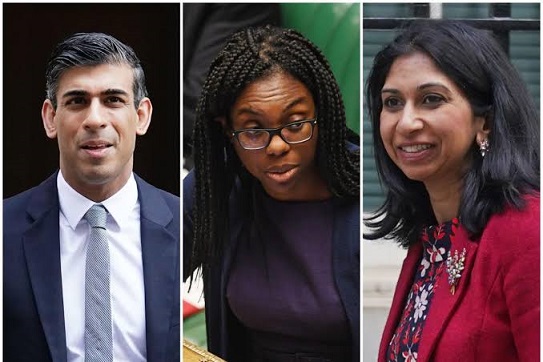 It is no longer news that the British Prime Minister, Boris Johnson has resigned from office. What is news is who will succeed him. His replacement within the ruling Conservative Party is scheduled to be announced come September 5.

Currently, some of the leading contenders for his job include Rishi Sunak, Kemi Badenoch, and Suella Braverman, QC as respectively seen in the attached picture.  The Nigerian equivalent of QC, Queen’s Chancellor is SAN.

They are all in their early 40s, Sunak is of Indian descent and the recent past Chancellor of the Exchequer (Finance minister) with Madams Badenoch and Braverman are a minister and Attorney-General respectively on Boris Johnson’s cabinet.

While our Kemi is a home girl. Suella, is a practicing Bhuddist called to the Bar in just 2005 from Mauritius. All are of course British citizens under the designation of, BAME (Black, Asian, Minority Ethnic)

Interestingly, Boris Johnson’s great-grandfather on his father’s side was Ali Kemal Bey (1869-1922) originally from the village of Kalfat in present-day Turkey.

In the United Kingdom (UK) non-Whites are generally referred to as, “minorities” or of “ethnic background”. BAMEs not only constitute 15% of the entire British population but have 65 Members of Parliament (MPs) out of a total of 650 in the House of Commons.

What does this political development in the UK tell Nigerians in an overall context? The question is pertinent as the ruling party in our clime currently subscribes to a Muslim-Muslim ticket. The very same parameter they vehemently opposed in 2015.

The moral for us from the UK is a delicate balancing of competence with capacity. And a self-imposed pulling of the reins on the tyranny of the majority becomes a possible threat to intercommunal harmony. Simply put, skillful management of diversity.

We Nigerians, are overtly religious people. Dangerously, too religious. We have allowed it to overwhelmingly dominate our national conversation to the detriment of our collective well-being. Sadly, ours is essentially doubtful religiosity as we hardly live up to the dictates of the different belief systems we pretentiously proclaim.

The White majority in the UK who mainly subscribe to the Church of England of whom Queen Elizabeth II is ceremonial head apparently have no qualms with, for instance, an adherent of Hinduism, Mr. Sunak being Prime Minister nor indeed a Muslim being the current Chancellor of the Exchequer – Nadhim Zahawi, an Iraqi Kurd born in Bagdad who arrived in the UK at the age of 11 in 1978.

Yet, here we are with the political leaders actively dividing us in Nigeria being deeply entrenched Anglophiles with many properties, different doctors, and various fat accounts in their adopted country over there.

Meanwhile, over here as ASUU enters its 150-day threshold of a national strike, we constantly see Nigerian public servants on social media increasingly attending convocation ceremonies of their children in British universities;

The figure, which amounts to an almost 64% increase within a year, is confirmed by data from UK’s Higher Education Agency.”

An Anglophile is, “a person who admires or loves England, its people, its culture and/or its various accents” -Wikipedia

The crisis of identity in Nigeria is being ventilated by the political class to sustain a consistent weaponization of poverty against the generality of our people. It is classic, divide and rule.

As Albert Einstein would opine, “Hunger is a bad political adviser” Helder Camara adds, “When I feed the poor, they call me a saint. When I ask why they are hungry they call me a communist”

Despite the huge concentration of political appointments and government resources to and for Arewa: what is the actual scorecard in the last 7 years?

According to Prof. Attahiru Jega;

“Whether it is poverty, youth unemployment, security challenges, maternal mortality, out-of-school children, lack of girl-child education, and early marriage. Anything you can think of, the terrible statistics come from the Northern part of this country.

And why is it so?

We have so-called leaders, who are selfish, and greedy, who have a narrow vision in terms of how this country can develop not to talk about the region where they come from. They really lack the intellectual capacity to be classified as leaders.”

– Excerpts from a public lecture entitled, ‘The Political and Socio-economic Consequences of Border Porosity in Northern Nigeria’ delivered at Umaru Musa Yar’Adua University, Katsina in November 2021.

The fundamental issue is neither North, South, Christian nor Muslim. It is inherently systemic. Period. If so, what is the way forward?

I am now officially, Peter Obi-dient. My proclamation means I endorse the Obi-Baba Ahmed presidential team. For me, it is more than a bid. It is an idea in progress even beyond 2023.

The pressing need for a paradigm shift in Nigeria cannot be overemphasized. There has to be a blueprint for a comprehensive overhaul in our nation.

However, as Fela would croon, one cannot be, “Follow, follow” with, “No break, no jam, no sense”.

The sad memories of my regrettable participation in the quest for, “Change” in 2015 are still too fresh. Eternal vigilance would therefore be key in my current political foray;