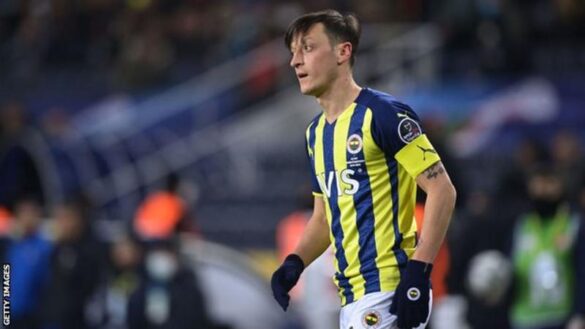 Mesut Ozil’s contract with Turkish side Fenerbahce has been terminated by mutual consent.

The 33-year-old joined Fenerbahce on a free transfer in January 2021 and was contracted to the Turkish Super Lig side until 2024.

But German Ozil has not played for his boyhood club since he was “excluded” from the squad in March.

“One of the things that makes life is that it is full of uncertainties,” Ozil posted on social media on Wednesday.

“Our plans, desires and wishes may not always go in the direction you want them to. I wanted to achieve success by getting more chances to play in the Fenerbahce jersey, which has always been my childhood dream.

“I would like to thank the Fenerbahce community and fans for the great support they have shown me.”

Ozil made 37 appearances across a season and a half for Fenerbahce, scoring nine goals, after arriving in January, 2021, as a free agent when Arsenal ended his contract six months early.

“It has been agreed that the contract between our club and Mesut Ozil will be terminated by mutual agreement,” said Fenerbahce in a statement on Wednesday.

“We wish Mesut Ozil success for the rest of his career.”

Ozil, a World Cup winner with Germany in 2014, said last month he would “patiently wait” for his time to contribute to his “childhood love.”

“I did not come to Fenerbahce and my homeland Turkey for a holiday,” Ozil posted on Instagram on 21 June.

“Every time I sweat our glorious jersey, I have no other purpose than to contribute. I have many goals that I would like to live in Fenerbahce, my childhood love. I will not quit football until I do these things.”

Fenerbahce replaced interim boss Ismail Kartal in early June with Portuguese coach Jorge Jesus, who then referred to “the end of the Ozil era” in his first press conference with the club.
(BBC)