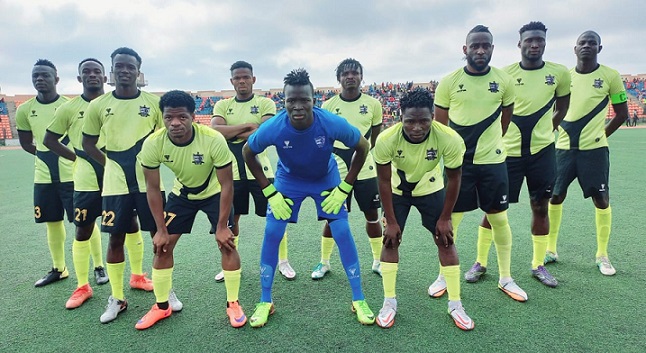 Goals from Captain of the day, Haruna LBC, and Muhammad Muhammad were enough to claim the three points that leave Doma United eight points clear of second place at the top of the log with two games to play.

The result ends Golden star’s quest for promotion straight back to the elite league for the first time of asking after their relegation last year.

After a relatively stabilizing week leading up to the match, the heat is back on Doma United as they sit five points clear of the second place and today’s opponents Jigawa knowing that anything but a win will prolong the wait for the all-important

Doma United survived a nervy opening 38 minutes to take the lead in the 39th minute after Haruna LBC heads home Hillary’s long throw to give Doma a 1-0 advantage before the break. The goal took the pressure off the home side and gave them the confidence to play their usual passing game for the remaining six minutes of the half.

Doma improved all around from the beginning of the second half and two-goal cushion arrived in the 65th minute as Hillary’s cross somehow found Muhammad at the far post and his poke goalward from near enough the byline squeezed into the net to give the Tigers a 2-0 advantage and puts them in the driving seat for the much needed three points that will guarantee Doma United’s promotion to the NPFL.

From that moment Doma barely got out of first gear and nor did they need to. The match ended 2-0 in favour of the Tigers.

Man of the match was Friday Oguche (Doma United)

Next match is an away encounter away in Zaria against Green Berets FC.