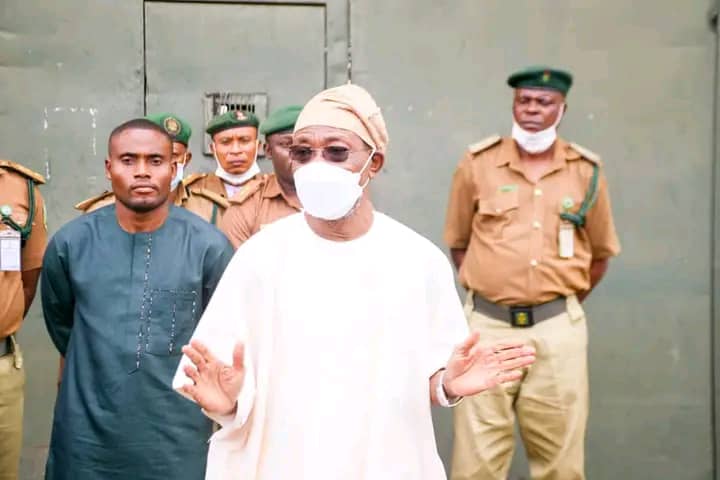 Minister of Interior, Ogbeni Rauf Aregbesola has advised officers and men of the Nigeria security forces and paramilitary agencies in the country to remain vigilant and continually remain on the watch to be able to defeat criminal elements terrorizing the country.

The Media Adviser to the Minister of Interior, Sola Fasure in a statement, Tuesday, said his principal, Aregbesola stated this when he paid a surprise visit to the Kirikiri Maximum and Medium Security Custodial Centres in Kirikiri, Apapa in Lagos.

“We must acknowledge our servicemen and security agencies, who have sacrificed a lot to make this possible. We must equally charge them to remain eternally vigilant and continuously evolve strategies. And to define these strategies, we have to make decisions based not on fear, but on hard-earned wisdom.

“I have also informed our officers and men here that they must fight to defend our institutions, territory and constitution. It also applies to all others wherever they are posted in Nigeria.

“The ragtag groups of opportunists must not be allowed to attack our institutions and get away. They must not live to tell the story,” Aregbesola stated.

On the part of the Nigerian Correctional Service (NCoS), the Minister directed that the management of the Service should improve its efforts on intelligence gathering and acting on such information garnered, saying it is the panacea to solving the problem of incessant Custodial Centres attacks.

“So far, no jail break by inmates has been successful; we have successfully quelled all of them. What we have reoccurring since the #EndSars protests of October 2020, has been a mass of people attacking our facilities from outside and setting the inmates free.

“However, I have now directed the Controller General of the NCoS to double his efforts on intelligence gathering to fortify and prevent breaches to the Custodial Centres beyond the use of arms and force”.

The minister further stated that the country is on the path to totally defeating Boko Haram terrorists and other criminals ravaging the country, stating that many of them have been arrested, especially in the north east.

“Today, a core of the criminal elements and insurgents across the country are on a path to defeat, they have been heavily degraded. Over 61,000 of them are in our custody in the North-East.

“Our assurance to Nigerians is that we shall rise above these challenges and emerge stronger and more resilient,” the statement added.