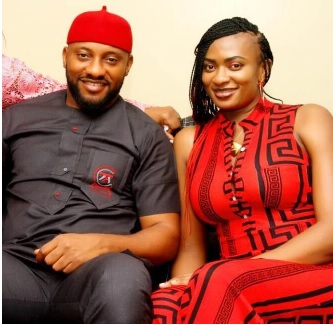 Nollywood actor Yul Edochie’s first wife, May, has thanked a fan who tackled him for taking a new wife.
The actor had shared a post of his first wife and last son on his Instagram page, appreciating her for bagging an endorsement deal.
This, however, did not go down well with fans of May who still have grievances with the actor over his decision to take another wife.

Yul Edochie’s 1st wife May thanks fan who tackled actor over decision to take new wife
“Na we dey marry May now”, go and continue with your new bag of rice and let our classy queen be. She didn’t sign polygamy from the day one. You hate your beautiful wife and children because of a loose woman. I weep for you,” one of the aggrieved fans wrote.

Surprisingly, May replied the comment in affirmation of the follower’s thoughts.

”Thanks,” she wrote alongside lovestruck emoji.
In May, a few days after Edochie revealed that he had gotten married to a new wife, May expressed her displeasure over his move.

“My phones are buzzing once again due to the OLD video trending online today. My family and faith ABSOLUTELY do NOT practice polygamy, although it works for some people,” she wrote on IG at that time

On Wednesday, April 27, 2022, the actor unveiled his new family on social media.

Yul and May have been married for sixteen years with four children.
(Pulse)

Aribo’s move to Southampton is he needed