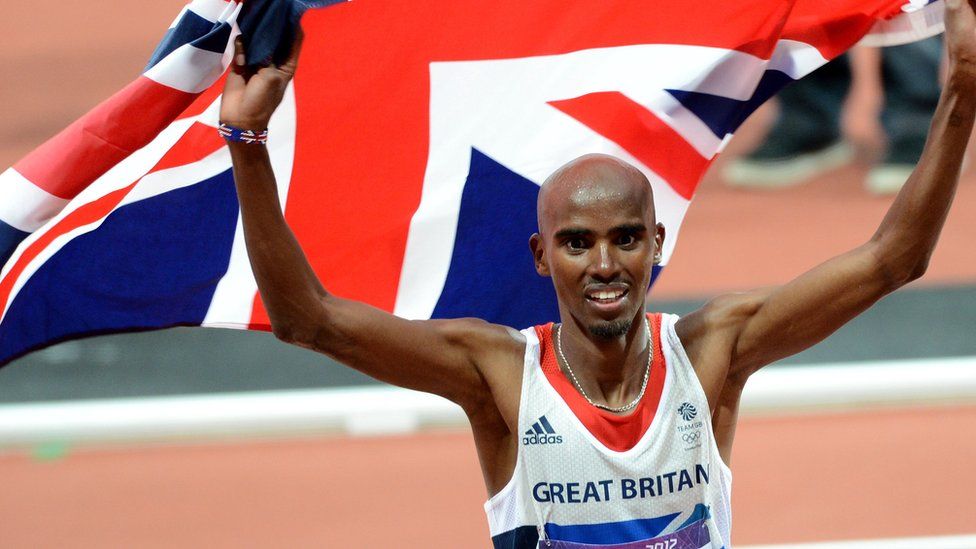 Sir Mo Farah is an “inspiration to people across the country” after disclosing that he was trafficked into the UK as a child, No 10 has said.

His story was a “shocking reminder” of the horrors of trafficking, the prime minister’s official spokesperson added.

Sir Mo told the BBC he was flown from Djibouti aged nine, given a false name and forced to look after another family’s children.

Fellow Olympian Sir Brendan Foster said his story was like a “Hollywood movie”.

Downing Street said work to clamp down on perpetrators must continue, while praise has come from a wide variety of figures across British public life.

Chancellor Nadhim Zahawi said he “salutes” Sir Mo Farah, describing the Olympic star as “truly inspirational” and an “amazing human”.
Having fled Iraq when he was just 11-years-old himself, Mr Zahawi said it felt “painful” to learn of Sir Mo’s experiences as a boy.

“I salute Mo Farah. What an amazing human being to go through that trauma in childhood, and to come through it and be such a great role model is truly inspirational,” he told the BBC.

Sir Mo, who won four Olympic gold medals for Team GB, had previously said he came to the UK from Somalia with his parents as a refugee.

But in a documentary airing on Wednesday on the BBC, he reveals that his parents have never been to the UK – his father was killed by gunfire in Somalia, his mother and two brothers live on the family farm in the breakaway state of Somaliland.
Sir Mo reveals to the programme that his real name is in fact Hussein Abdi Kahin.

Mr Zahawi said he felt “lucky” to have had his parents with him when they were forced to flee from Saddam Hussein’s regime in Iraq.

“I didn’t understand why we were fleeing Saddam Hussein, I knew he was a dictator, I knew he was bad,” he said.
Sir Brendan Foster said he was “absolutely staggered” by Sir Mo’s disclosure.

He described his story as a “Hollywood movie”, adding that it was an “amazing, successful story of someone overcoming adversity.”

He said it was “amazing” that the Olympian had emerged from his childhood experiences with a “light-hearted personality” and “steely determination”.

Lisa Nandy, shadow secretary of state for levelling up, suggested that the decision to speak out about trafficking could be a “gamechanger”.

London Mayor Sadiq Khan praised Sir Mo for highlighting the crime of child trafficking, adding: “We must build a future where these tragic events are never repeated”.

Dame Sara Thornton, the UK’s Anti-Slavery Commissioner, said fear and manipulation stopped many victims of trafficking and slavery from speaking out.

“They will have been told that the authorities won’t help them, they will be under the control of their traffickers and their abusers, they may have been physically or psychologically threatened,” she told BBC’s Today programme.

“Victims don’t realise that in fact they are victims of a crime.”

Comedian David Baddiel described Sir Mo as a “hero”, sharing a picture of the pair, alongside fellow comedian Frank Skinner, in a tweet which read: “Whether he’s Sir Mo Farah or Hussein Abdi Kahin he’s a hero.”
(BBC)