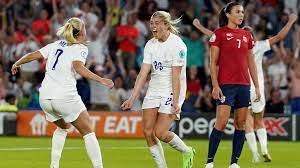 England produced a sensational, record-breaking performance to stun rivals Norway as they progressed to the knockout stages of the European Women’s Championship as group winners.

Brighton was treated to a memorable night as England broke their own tournament record to win 8-0 in what was perceived to be their biggest test of the group stages.

Norway, ranked 11th in the world, were outplayed, outclassed and completely stunned by an England team oozing confidence.

After an underwhelming opening victory over Austria, England started in cagey fashion but, after Georgia Stanway slotted in a 12th-minute penalty, there was only one winner.

Within half an hour, Lauren Hemp and Ellen White had extended England’s lead and excitement was rippling around the Amex Stadium.

What followed was a ruthless onslaught on Norway’s goal – Beth Mead netted a hat-trick, Alessia Russo came off the bench to score and White got a second on the night to move to within one goal of Wayne Rooney’s all-time England goalscoring record.

It was a statement performance to the rest of Europe as England fly into the knockout stages having comfortably confirmed their status as one of the tournament favorites.

Sarina Wiegman said she wanted her side to “entertain” in Brighton and, boy, did they do that.

Their sensational first-half performance stunned everybody inside the stadium, with friends and family next to the media box gasping and on their feet for almost the entirety of it.

Every attack threatened to add to England’s tally and the supporters inside the Amex knew it, cheering and getting to their feet in anticipation.

As one supporter said while walking down the steps at half time – “what is going on?”

That was surely the question running through Norway’s minds as their players looked shell-shocked when they sprinted down the tunnel with their heads bowed.

England’s players were given a version of a guard of honor by the substitutes, who clasped hands with each one with defender Millie Bright roaring “let’s go!”.

The Lionesses’ 6-0 victory over Scotland in 2017 was the biggest winning margin in the competition’s history and they had equaled that by half time. It was only a matter of time in the second half before that was beaten.

Norway boss Martin Sjogren had tried to put pressure on England in his pre-match media conference, suggesting the hosts were clear favorites going into this match despite only being ranked three places higher in the world standings.

Wiegman had played it down, smirking as she shrugged off the suggestion of added pressure and merely stated: “It is just a football match.”

England made sure it was not just any football match.

After the seventh goal went in, the loudest rendition of ‘It’s coming home’ rang around the stadium.

England’s supporters shone lights from their phone cameras minutes later and they rose to their feet at full-time as the players danced to the music blaring out from the speakers.

The scenes of celebration capped off a perfect evening for the hosts, while Wiegman was able to rotate her players and give game time to those who have been unlucky to miss out on a place in the starting XI.

The players gathered in front of fans and the stand containing their families, held hands and sang ‘Sweet Caroline’ in a final act before taking a walk of honor around the pitch.