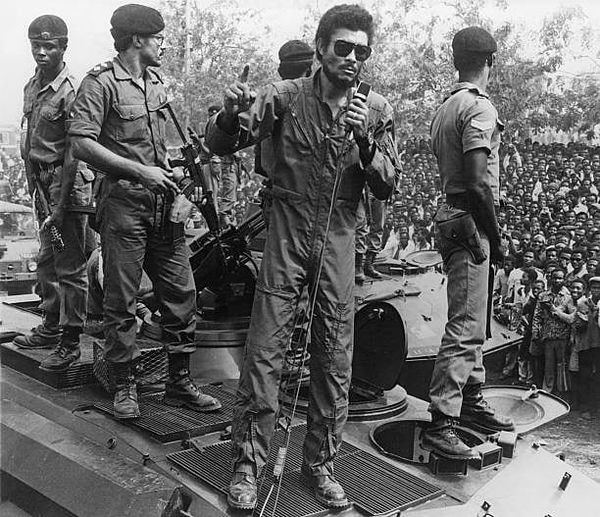 Every prison break has a top inside man that the escapees do not know. They are mere pawns in a high-stakes game they are clueless about. The political fallout and unintended consequences could swing in any direction depending on who the puppet master is.

Flight Lieutenant John Jerry Rawlings (1947-2021) used his escape from Burma Camp, Ghana’s most fortified military base to politically reinvent his career from that of a failed coup apprenticeship. While on trial for plotting against Ghana’s junta, Rawlings addressed the military court trying him on the opening day of May 18, 1979;

Since the charismatic fighter pilot knew he was facing a certain death sentence so he played to the gallery by using his trial and that of six others as a popularity contest by circumventing the charges against him.

His second and third subsequent appearances at the tribunal were heralded by pressing crowds of rank-and-file milling around the scene just to hear his grandstand. There was no fourth appearance because he sprang out of jail on June 4, 1979.

Little did he know he was a mere pawn on somebody else’s chessboard.

Immediately after Rawlings addressed his compatriots on the radio from the studios of Ghana Broadcasting Corporation nearby. Expectedly, he was quite jittery, largely uncoordinated, and heavily panting as he unequivocally admonished, “You are either part of the problem or part of its solution. There is no middle way.”

Rawlings not only announced the overthrow of Lt. General Fred Akuffo’s (1937-1979) led Supreme Military Council but its replacement with what he described as the Revolutionary Council.

He nevertheless assured the forthcoming presidential elections would still hold. Barely an hour or so later, Army Chief, Major General Alexander Odartey-Wellington (1934-1979) bravely took over the reins of the Akuffo-led junta back and declared Rawlings a wanted man.

What Wellington and even Rawlings did not know back then was that Ghana’s then Chief of Defence Staff, Major-General Joshua Mahamudu Hamidu (1936-2021) was the grandmaster of what was playing out.

The investigation that led to Rawlings’s arrest on May 15, 1979, was signed off by Hamidu. Yet, while the rebel leader was briefly on the lam it was the CDS that in a swift counter maneuver ode the army chief’s authority. Wellington was gunned down and Hamidu handed over power back to Rawlings’s, Revolutionary Council. Game over.

The CDS was a Sandhurst-trained officer and military intelligence expert tutored by the Israelis – a classic puppet master and quintessential inside man too highly placed to ever be suspected.

This is reminiscent of Rear Admiral Wilhelm Canaris, Chief of Abwehr, the secret intelligence and counterespionage service of the German General Staff appointed in 1933 but was actually a British mole.

He was not uncovered till nearly the end of the Second World War in 1945. By that time Germany was on the verge of losing the conflict.

Anyway, Rawlings would keep to his promise for presidential elections to hold in Ghana. So, on September 24, 1979, he handed over power to an elected president, Dr. Hilla Limann (1934-1998)

Rawlings claimed he used the ensuing period June-September for, “House cleaning purposes” of Ghana’s top serving and retired brass. Except for Hamidu.

After Rawlings’s rise to power, he went around Ghana directly appealing to his fellow countrymen and women to support the Revolutionary Council.

He had no prepared speech nor overzealous media aides hunkering around him. He spoke from the heart with convincing fervor. At one of such gatherings captured in the attached picture he declared;

A question of the vast majority of hungry people against a tiny minority of greedy, inhumane, and selfish senior officers, politicians, businessmen, their bank managers, and a bunch of Lebanese who would not stay in their own country….”

Rawlings went on to rhetorically ask, “Where on earth has can salvation come to a people without those suffering, starving, hungry people taking the law into their own hands?”

He then concluded by answering his own question, “The big man will not help you because his stomach is full.”

Hamidu was Rawlings’s inside man without the rebellious Flight Lieutenant ever suspecting so.  After remotely controlling Ghana’s most historic prison break, he stepped aside as CDS.

He would eventually serve as President John Kuffour’s National Security Adviser and his nation’s High Commissioner to Nigeria after he famously fell out with Rawlings.

Unfortunately, General Hamidu did not get around to publishing his memoirs to give the details of their disagreement before Covid-19 took him out last year.

Beyond our constant debate on whether or not Ghanaian Jollof Rice is better than ours, a friend of mine, Engineer Arthur jokingly puts it that Ghana is more tolerant than Nigeria because it is where “A Scottish bastard can become a leader.”

Remember, every prison break has a top inside man that nobody knows till the game is over.

Africa Anti-Corruption Day: Nigeria’s Anti-graft, Law Enforcement Agencies Need to Do More Ahead of the 2023 Elections