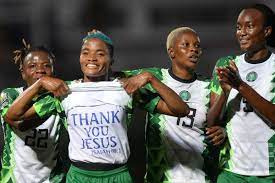 Nigeria hammered Burundi 4-0 in their last Group C encounter at the ongoing Women’s Africa Cup of Nations on Sunday night to set up a knockout meeting with Cameroon.

Uchenna Kanu’s brace as well as goals from Rasheedat Ajibade and Peace Efih helped the Super Falcons subdue the Swallows at the Stade Moulay Hassan in Rabat.

The West Africans finish the opening round as runners-up in Group C, and will now face Group B runners-up Cameroon on July 14 for a chance to earn a place in the semi-final as well as a place in the 2023 FIFA World Cup billed for Australia and New Zealand.
Having brushed aside Botswana 2-0 last time out, Randy Waldrum’s side went into the game – needing at least a draw to secure passage to the quarter-final.

Nevertheless, they went for goals which propelled them to an emphatic triumph over the debutants.

The first chance of the game fell to Nigeria in the second minute but Ifeoma Onumonu shot wide after she was set up by Ngozi Okobi.

Even at their early dominance – which saw they play five corner kicks in the first ten minutes – the West Africans found it hard to score owning to profligacy in front of goal.

The Atletico Madrid forward stepped up to take the ensuing kick and scored to send fans into a frenzy.

Shortly before the restart, Irakoze was subbed off for Amissa Inarukundo owing to a thigh injury.

Less than a minute into her introduction, she was beaten by Efih who tucked home a cross from Ajibade after Rachelle Bukuru failed to clear her line.

In the goal-laden first half, Waldrum’s team got their third goal of the night courtesy of Kanu who slammed the ball home from another fine delivery from Ajibade.

Although the East and Central Africans tried to make some attacking run, they were caged by the defence line well-orchestrated by captain Ebi.
Notwithstanding their convincing lead, the Super Falcons kept their drive for more goals and that paid off just 22 seconds into the second half as Kanu completed her double from a simple finish.

Nigeria’s unpardonable misses denied them the chance to score at least three more goals, while Burundi – who were contended sitting back to deny their opponents from wreaking more havoc.
(Goal)