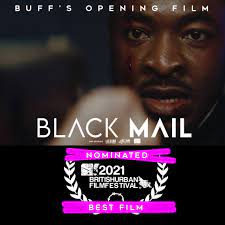 Blackmail, Obi Omelonye’s cyber thriller has been confirmed for an unprecedented simultaneous theatrical release in the United Kingdom and Nigeria.
The multiple award-winning film will begin screening across over 100 UK cinemas from August 26, 2022.
Written and directed by Emelonye, the feature length film based on real life events follows the gripping tale of Ray Chinda (O.C Ukeje), a world famous action star embroiled in a messy blackmail that could ruin his thriving career and family.

With nowhere left to turn, Chinda decides to play the situation as if it was from one of his movies and goes after the gang behind the scam.

Meanwhile, operating from London behind layers of VPN encryptions, Mighty Igor and his enslaved assistants provide the tip of a ruthless Russian criminal iceberg; lurking to sink many unsuspecting victims.
As the clock ticks towards zero hour, Chinda blunders his way through Mighty Igor’s game of cyber cat and mouse. With his back against the wall, he must put everything he loves on the line, close ranks with the most unlikely ally and confront Mighty Igor; at a very critical time when the Russian criminal empire is beginning to unravel from the inside.

Since its official outing at the British Urban Film Festival (BUFF 2021) where it screened as the opening film, Blackmail has maintained a steady trajectory, recording nominations and wins at international awards and festivals.

The film won the Best Film by an African Living Abroad at the 2021 African Movie Academy Awards (AMAA) in Nigeria. It also made the official selection for the 2021 edition of the Halifax Black Film Festival in Canada.
(Pulse)