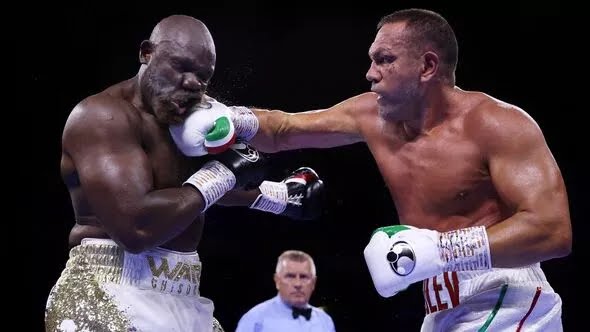 The fight started and Pulev set the pace of the contest with the jab, he used his distance better, Chisora waited and as he could not shorten the distance as a whole, he hit a lot to the body.

In the fifth round, Pulev came out with a cut on his left eyebrow from an accidental headbutt. Chisora cut the distance a bit, but there he was met with good combinations from the Bulgarian. Pulev’s wound opened up more as he landed more punches.

The eighth round had a lot of emotions, there was an exchange of punches, and with an uppercut, Pulev made Chisora stagger, the Bulgarian smelled blood, and went on top, but the Briton defended well with punches. An exciting round.

In the tenth round, there was another accidental headbutt, now Pulev’s right eyebrow was bleeding. Chisora slowed down a bit in the last rounds, he took a lot of punches.

The Brit was finally able to put an end to three losses in a row: he lost to Oleksandr Usyk and twice to Joseph Parker. Also, the Briton was able to take revenge on Pulev, in their first fight, the Bulgarian won by a split decision.

Rey Vargas won a world title in a second-weight division tonight, beating Mark Magsayo by split decision in San Antonio to take the WBC featherweight belt. Vargas definitely didn’t have the relatively easy fight we’ve seen him have in past 122 lb title defenses, with Magsayo making him work plenty to earn the decision.

But Magsayo also did have a tough time with Vargas’ length and movement, even if Vargas was sitting down on punches and engaging more than we’ve also often seen in the past. On paper, this would have given Magsayo a better chance, and it may have been the biggest thing keeping him alive through the end of the fight.

This was a short-notice fight, as Marinez came in on just over a week’s notice to replace Ricardo Nunez, and Martin allowed for a 138 lb catchweight to make the fight happen. Boxing fans got a win with this, because Marinez (19-3, 7 KO) gave Martin (16-0, 12 KO) a much better fight than I think anyone expected Nunez would have.

We said it a bunch during the fight, but if Marinez had gotten this with proper notice, it might have been even better. But we got what we got, and we saw Marinez again give a really good effort but again lose.

It’s the third fight in a row he’s lost, and the second in a row that wasn’t him being absolutely jobbed on the cards, and yet I come out of this still thinking Marinez is a good, tricky opponent for a lot of guys at 135.

Martin, though, did the job. He did have some frustrating rounds in the middle with Marinez, but once he got his right hook going late, he had a wrap on things.

‘With Shettima, Tinubu has made the wisest choice’ – Zulum

Ruger reveals the secret why he wears an Eyepatch