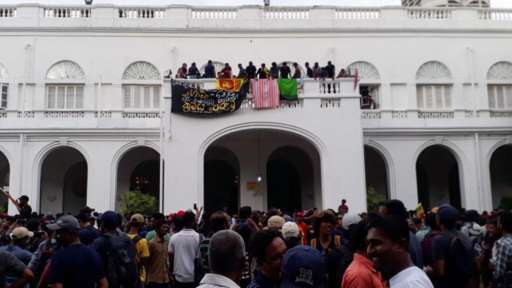 The home of Sri Lanka’s Prime Minister Ranil Wickremesinghe has been set on fire.

Over the past hour the unrest between protesters and police has intensified outside Wickremesinghe’s residence in the country’s capital Colombo.
His private home in Colombo is currently under siege and on fire, just hours after thousands of people occupied President Gotabaya Rajapaksa’s official residence in Sri Lanka’s capital.

“Protesters have broken into the private residence of Prime Minister Ranil Wickremesinghe and have set it on fire,” an official from his office told the BBC.

We don’t yet know the whereabouts of the PM at the time it was set alright.

Wickremesinghe lives with his family in the private home, known as Fifth Lane. He uses his official residence, called Temple Trees, for official business only.

Earlier, Wickremesinghe offered to resign and form an all-party government in the wake of massive public anger over an unprecedented economic crisis that has brought Sri Lanka to its knees.
As the protests continue, the exact location of Sri Lanka’s President Gotabaya Rajapaksa remains unknown after he earlier fled his official residence.

The property in the country’s capital Colombo has since been stormed by large crowds with protesters demanding his resignation.

Rajapaksa was escorted to safety after people gathered outside the gates, and he is being protected by a military unit, a top defence source told the AFP news agency.

But speaking to Newshour on the World Service from Colombo, the BBC’S Ranga Sirilal explained that no-one knows where the president is.

He said there are claims Rajapaksa is trying to flee Sri Lanka “at any moment” and that he is at the airport.

However, there are other reports that he’s next to Colombo Port amid claims “that two ships that docked at the port were seen loading some travelling bags, suggesting that the president is going to leave”.

What seems more certain, Sirilal added, is that it appears protesters won’t leave the residence until the president resigns and there is some political stability.
(BBC)

‘Money and success can never change me’ – Davido