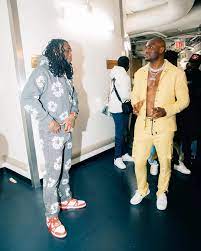 On Burna Boy’s track Usman reveals what he does when in a bad mood.
On Friday, July 8, Nigerian singer, songwriter, and record producer Damini Ebunoluwa Ogulu, known professionally as Burna Boy dropped his sixth studio album.
The album rose to the top of the trends of Nigerian social media as fans praised Burna Boy for yet another solid album.

Burna Boy teamed up with Ultimate Fighting Championship (UFC) Welterweight title holder Usman on the song How Bad Could It Be.

Usman and Burna Boy
On the track How Bad Could It Be, Usman was among the celebrities that gave the introduction.

“I give myself time to be able to make a rational and educated decision that will help me through the decision.”

Usman and Burna Boy teamed up at the One Night in Space concert and was also on the video of the popular hit Ballon d’Or.
The revelation by Usman comes as he gets ready for the rematch against Leon Edwards.