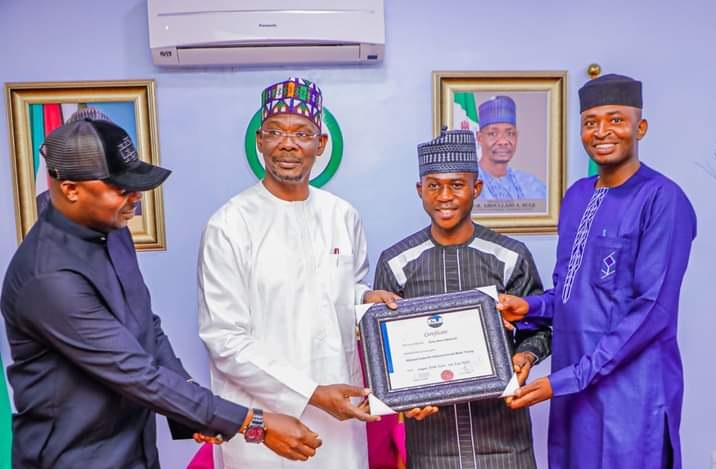 Speaking during a special reception held in honour of the Public Relations Officer at the Government House, Lafia, the Governor said Eche’s feat has again brought pride to the State and strengthened confidence in the talents that abound in the State, assuring that his administration will continue to prioritize investing in human resource development.

“This is a very huge event that we should have had everybody here but because of how things are, we have to do it this way.

“But I congratulate you for attending the program and doing us proud over there.

“When I wanted you to go for that Program, I was already aware that Flour Mills, Dangote Group of Companies, SPDC and other multi-national organizations were equally sending their staff for the program, so, I felt it would be an opportunity for you to explore your potentials.

“So, for attending the Course and only one from the Northern States of Nigeria makes us even more proud, which is an indication that we understand the value of what you went for.

“The recommendation about you by Capacity for Africa after the program speaks volumes of who and what you are.

“Discovering who you are is really helping the State. Believe me, this knowledge you have acquired is not for you, but for the entire State.

“You are a young man with a lot to explore. People will be competing for you, but no one can come and claim you from us because you are an asset to Nasarawa State.

“Thank you for what you have done and we are proud of you.”

The Governor disclosed that it has always been his desire to expose the numerous hidden talents that abound in the State for global stardom.

“One of the things I have been trying to do is to see how we can expose the hidden talents that we have in Nasarawa State, and God willing, the world is beginning to see the talents we have and is appreciating them accordingly.

“You (Eche) can equally help us to discover those hidden talents so we can nurture them.”

He pledged to justify the confidence reposed in him by working harder to give his best for the overall development of Nasarawa State and beyond.

Earlier, Commissioner for Youth and Sports Development, Lucky Isaac Yargwa, had presented the PRO to the Governor and briefed him about the Recommendation Letter addressed to him by Capacity for Africa on the performance of Eche Amos at the Training in Lagos.

He also briefed the Governor of the award presented to him by Northethe rn APC Youth Counseling Forum for his meritorious service to the people of Nasarawa State.

Chairman of Nasarawa United FC, Isaac Danladi, used the occasion to thank the Governor for creating enabling environment for talents development and socio-economic prosperity of the State.

Eche Amos emerged 2nd overall best participant at the Training which began from 20th June to 1st July, 2022, at the Training Centre of Capacity for Africa in Ikeja, Lagos State.