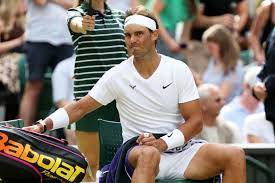 Rafael Nadal has withdrawn from his Wimbledon semi-final against Nick Kyrgios with an abdominal injury.

The 36-year-old Spanish second seed received treatment during his quarter-final against Taylor Fritz on Wednesday but pushed through the pain to win in five sets.

“I have tried a lot of times in my career to keep going but it is obvious the injury will get worse,” he said.

Nadal confirmed he has a tear in his abdominal muscle which means he would not be able to be competitive over two matches.

The 22-time Grand Slam champion had practised at Wimbledon away from the media earlier on Thursday but then called a news conference.

“Throughout the whole day I have been thinking about the decision to make,” Nadal told reporters.

“I think it doesn’t make sense to play. I feel very sad to say that.”

Nadal had strapping on his abdomen during his fourth-round match but was in visible pain from the injury against Fritz.

He took a medical time-out during the match and ignored calls from his dad and sister to quit before somehow rallying to win.

The two-time Wimbledon champion had been on course for a calendar Grand Slam, having won the Australian and French Opens already this year.
‘Happiness more important than titles’
Nadal had been a doubt for Wimbledon because of a chronic foot condition which he had to manage during his run to a record-extending 14th French Open title last month.

He had performed well at the All England Club but was visibly struggling during the match against Fritz.

His serve was noticeably affected by the injury and he said on Thursday that he could not serve “at a normal speed”.

“I can’t imagine myself winning two matches and for respect to myself in some way I don’t want to go out and not be competitive enough,” Nadal said.

“A couple of weeks ago I saw my career very different because of the foot injury.

“The most important thing is happiness more than any titles. I can’t risk that match and stay two or three months out of the competition.

Kyrgios wished Nadal well in a social media post, adding: “We all hope to see you healthy soon”.

Nadal does not regret finishing Fritz match
Nadal has had a stunning year so far, despite playing much of it in pain from various injuries.

He began the year by rallying from two sets down to beat Daniil Medvedev and lift the Australian Open title.

He won his first 20 matches of the year before losing the Indian Wells final to Fritz, where he was hampered by a rib injury.

Nadal then won the French Open with no feeling in his left foot as it was anesthetised because of chronic pain.

He suffers from Mueller-Weiss syndrome – a rare degenerative condition that affects bones in the feet – and shortly after his Paris triumph he had a treatment that places heat on the nerves to numb pain.

Nadal said it was the right decision to finish his match against Fritz, adding he was not a person to have regrets over decisions he makes.

“I had this feeling in the abdomen for the past week,” he said. “It will be three or four weeks, which is normal for these kind of injuries.

“I hope this will allow me to do my normal calendar, the calendar which I have in mind.”

The US Open, which begins on 29 August, is the next Grand Slam tournament.
(BBC)