Menu
Home Opinion PMB at the Kuje Correctional Centre: Beyond the Chagrin on Culpability
Opinion

PMB at the Kuje Correctional Centre: Beyond the Chagrin on Culpability 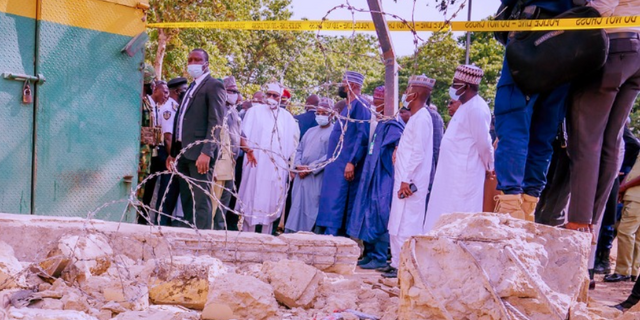 Pursuant to the embarrassing attack at the Medium Security Custodial Centre, Kuje, by terrorists, in which hundreds of inmates escaped, including over 60 terrorists, one of whom is the chief bomb maker for the terrorists, President Muhammadu Buhari paid an unscheduled visit to the centre yesterday, wherein he lamented on the failure of intelligence.

Like everyone in Nigeria, PMB asked, “How did the defences at the prison fail to prevent the attack? How many inmates were in the facility? How many of them can you account for? How many personnel did you have on duty? How many of them were armed? Were there guards on the watchtower? What did they do? Does the CCTV work?” PMB kept asking questions un-end. But the biggest question is coming from the public, thus, would the President do anything?

The cynics, who are of the view that on security, PMB is fast turning into a weakling, that is only motivated by self-interest, as against doing what is honourable, are saying, like what had happened in the past, beyond the chagrin before the camera at the correctional centre, nothing would come out of that outrage.

The picture of the attack became more painful when the Permanent Secretary, Ministry of Interior, Dr. Shuaib Mohammad Lamido Belgore and the Controller General of Nigerian Correctional Service, Haliru Nababa, took time to show the President the bombed-out section used to gain entry, the records office which was set on fire, and how the terrorists targeted all the cells in which Boko Haram suspects were held. They said, at the end of it, all the 63 terrorists held at the centre have been set free.

In disillusionment, PMB said, “I am disappointed with the intelligence system. How can terrorists organize, have weapons, attack a security installation and get away with it?” The President said he is waiting for a comprehensive report on the attack.

But the question on the lips of many is, would anything be done after the submission of the report?

The most frightening part of the story is the disclosure by Mallam Tukur Mamu, the publisher of the Desert Herald Newspaper, and one that has been communicating with the terrorists, that he had prior knowledge of the attack on the Kuje Correctional centre, and he shared his intelligence with the security forces, but nothing was done to avert the attack. Mamu, who negotiated the release of some of the hostages that were abducted on the Kaduna-bound train from Abuja, said the same group that attacked the prison is the same group that attacked the Kaduna-bound train in March.

If PMB’s lamentation is on the failure of intelligence, Mamu, said that is not the cause of his concern. He said enough intelligence was given to the powers that be, but maybe because some people are benefitting from the situation, the intelligence was treated with levity, which amounts to another crime completely.

“For me, there’s no difference between corrupt officials or contractors that are committing treason against the nation by way of stealing the resources that will benefit everybody, monies that will stop preventable deaths in our hospitals due to decaying structures, improve standards of education and even stop insecurity and crimes with the terrorists that emerged because of this sad reality and now unleashing terror on the entire society. It was after the failure of the fourth opportunity that they angrily issued the fresh threat to start slaughtering their victims yesterday, Tuesday.

After much pleading with them, tolerating abuses and begging them to allow individual family members to contact them directly, they gave today, Wednesday, 6th July, that if there is nothing definite from family members, they will start executing their threat. I immediately passed this disturbing intelligence to all the relevant security agencies, the National Assembly leadership and other stakeholders.

But sadly, as of today, Wednesday, which is the deadline they gave, there is no word from anybody. I have nevertheless sent words to them to reconsider their threat and allow family members to reach out to them. And even on the tendency and threat to attack targets and other facilities of interest like the Kuje Correctional Centre attacks, I have shared that intelligence with the security agencies and the committee that was constituted by CDS (Chief of Defense Staff) Gen. Lucky Irabo”.

Indeed, the Kuje attack is only one out of a number of coordinated attacks, that clearly aimed at embarrassing the President and those in charge of national security. To attack the advanced convoy of the President in Dutsenma, about 152 kilometres from his hometown of Daura, in the afternoon, and again attack a prison in Kuje, which is about 40 km to the Presidential palace in Aso rock, in the early hours of the night of the same day, is not only a sign of fearlessness but a serious statement of sarcasm on the state of national security of a country.

While some are of the opinion that the President should, as a matter of urgency, sack the CG, Correctional Services, Mr Haliru Nababa and the Minister of the interior, Rauf Aregbesola, methinks that would only amount to the making of some scapegoats.

If indeed the President wants to match words with action, he should go beyond the chagrin on culpability, by showing his anger first at the office of the national security adviser.

Monguno has no business advising the President on national security if he can not foresee the twin attacks on the President’s state of origin and the President’s city of residence. More so, when both attacks, technically took place on the same day.

“I Will Be Engaged By Next Year” – Emmanuel Umoh