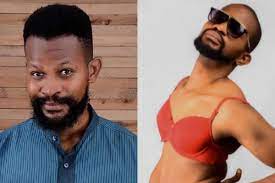 Controversial Nollywood actor Uche Maduagwu had made a U-turn about his sexuality.
The actor made this known via his Instagram page on Monday, July 4, 2022.
“I was born gay. I am still gay, I will forever remain gay. The government cannot tell us how to live our lives in Nigeria. What is happening in the North, especially Bauchi is so unfair and wrong. No single pastor spoke out against sharia erroneous undemocratic laws, why?” he wrote.
He went on to appeal to the president of the United States of America, Joe Biden, to sanction his Nigerian counterpart for infringing on the rights of Nigerians.

“Dear President Joe Biden, we need the US government to sanction President Buhari and his top advisers over ignoring the Fundamental Human rights of #LGBT in Nigeria, just few days ago, a Sharia court sentence #Gay men to be STONED, is this our country a #Democracy or #Banana Republic?” he added.

It would be recalled that in 2021, the controversial actor revealed that he was gay.
He came under severe backlash from several Nigerians including celebrities like Victoria Inyama who believed he was not sincere about his sexuality.

A few months later, he made a U-turn and denied being gay.
“Dear fans, I am not gay. I lost movie roles, endorsements and my girlfriend fighting for LGBT rights in Nigeria,” he wrote.

“Omg, even my girlfriend left me despite knowing I was fighting for LGBT right in Naija but I no regret using my celebrity status to fighting for this beautiful community.”

Maduagwu is a popular actor who became famous for trolling politicians, celebrities, and pastors on social media.
(Pulse)