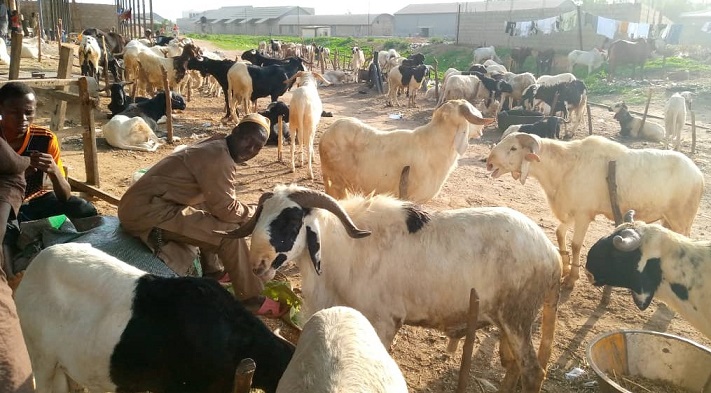 Kano – Sallah also known as Eid-el-Kabir is a sacred month in Islam, in which Muslims perform the Ḥajj and as well observe the Festival of Sacrifice.

The sacrifice is the slaughtering of Rams, Cows, Sheep, or Camels to bring to the fore the giant strides and perseverance of Prophet Ibraheem and his son, Ismail, (Peace And blessings of Allah be with them) in total obedience to the will of Allah.

A few days to observe Sallah, Cattle sellers in Kano state are lamenting over low patronage, saying, Rams, Cows Camels are available but customers are not forthcoming.

Stallion Times visit to some of the cattle selling points and market observed that roadside ram vendors within major junctions in the state are just sitting quietly waiting for would-be buyers, while others with few customers are seen bargaining to reach an agreeable price for both buyer and seller.

The Chairman of the Cattle Selling Association, Railway, Idris Damaraya expressed sadness over the low turn-out of buyers, stating that the poor economic situation coupled with the rising inflation in the country has affected everything and everybody.

Damaraya revealed that in previous Sallah festivals, cattle traders in the market usually sell all their cattle, but this year, the revised seems to be the case as most of their customers are not showing up.  show up.

“When I call my usual customers, they will say they are struggling with what their family will eat, but they may come for one or two rams.”

He disclosed that the hike in price is not the union’s fault; the cost of Rams has shot up to between 70 and 90 percent in most parts of the country where we buy them from.

The Chairman further explained that the difference in the price is due to the increment in the price of feeds, transportation as well as taking care of the animals.

Corroborating the position of the Railway Chairman, Rabiu Salisu a cattle dealer who came from Gezewa Local government revealed that because of the price tag on his Rams, buyers are refusing to buy.

He stated that despite the enormous blessing attached to the sacrificing Rams during the Eid festival, many have decided to go for alternatives because of the poor economic situation.

“Business is really slow this year; however, I am hoping that before the day of Sallah, I will be able to make some sales.”

Another cattle dealer, Alhaji Sali Umoru said taking care of the animal is very expensive “in the past, I use to buy 800 Naira Dusa and Harawa to feed my Rams, presently, now a bag costs 2,500 to 3,000 Naira.

“Just last week I paid 5,000 Naira to transport my cattle against the 2,500 Naira that I usually pay.

“I have had a lot of losses already,” he lamented.

“I cannot go ahead with the purchase because my family may not have enough after the period.

“I will look for an alternative,” he concluded.

On his part, Baba Haruna said it is so unfortunate he will not be able to buy Ram this year because of financial challenges. “I am sad because my family is used to slaughtering ram but this year things are really difficult for me.”