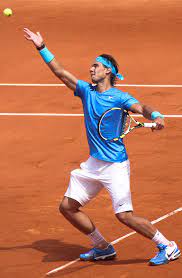 Rafael Nadal fought through injury to come from behind to beat Taylor Fritz and reach the Wimbledon semi-finals.

It keeps Nadal’s bid for a calendar Grand Slam on track and sets up a semi-final against Nick Kyrgios.

Nadal, who had strapping on his abdomen in his previous match, was bothered by the same issue again.

The first question he faced after the forehand winner that sealed victory, in a match that at one point he looked like he might not be able to finish, was ‘how did you do that?’

It was the one on anyone’s lips who witnessed the events on an enthralled Centre Court.

“The body in general is fine, but in the abdominal [area] something is not going well, being honest. I had to find a way to serve a little bit different.

“For a lot of moments I was thinking I would not be able to finish the match but the crowd, the energy, thanks for that.”
Nadal’s fighting spirit gets him through
Nadal, who was in sublime form in his previous two matches, had got off to a good start with a break in the opening game but Fritz raced to the net to launch a stunning forehand down the line to break back for 3-3.

From then on Nadal seemed troubled physically and when he handed Fritz a break with a double fault, the American wasted no time serving out the set with three aces in a row.

The Spanish 22-time Grand Slam champion went off court for treatment at 3-4 in the second set and although he returned to take that set, his movement continued to be hampered and he struggled on his backhand side and on his serve, which increasingly dropped in speed.

Hanging his head while sitting at the changeovers, Nadal looked lost, calling on the trainer at the end of a third set that he handed to Fritz when he sent a forehand wide. He had a chat with the trainer but no treatment, merely shaking his head before heading over to the baseline.

Nadal was broken eight times in the match, his serve frequently 25mph slower than that of his opponent, but he held it to love to take the fourth set and force a decider that had looked so unlikely at times.

This was a reminder that this is one of his sport’s all-time greats and whose fighting spirit is his trademark.

Nadal had break points at 3-3 in the fifth, one of which was saved by a cruel net cord, before he finally converted the fourth with a delicate forehand drop shot.

But Fritz, who had beaten Nadal earlier this year in the Indian Wells final and won the Eastbourne title just before arriving at the All England Club, responded brilliantly with an immediate break back and hold to leave the Spaniard serving to stay in the match as the clocked ticked past four hours.

He held firm and Fritz quickly held his own serve again with an ace, with Nadal then roaring when he took it into the tie-break, where he quickly went 5-0 ahead.

A drop shot from the Spaniard left Fritz lying on his back, watching Nadal’s winner go past him at the end of a 25-shot rally, before the two-time Wimbledon champion turned a final screw with a forehand that put him into his eighth Wimbledon semi-final.

“It’s been a tough afternoon against a great player,” said Nadal, who has a perfect record of winning all eight of his quarter-finals here. “Credit to Taylor that he has been doing great all season.”

But will Nadal be fit to face Kyrgios?
Nadal arrived at Wimbledon a couple of weeks after having treatment on his chronic foot condition after he won a record-extending 14th French Open title without being able to feel his left foot because of anaesthetic injections.

The abdominal issue that troubled him against Fritz had already affected him in his fourth-round match and while he now has a day off to recover, it remains to be seen what the impact of this gruelling encounter will have on his chances in the semi-final against an in-form Kyrgios.

“I hope to be ready to play it,” Nadal said. “Nick is a great player on all the surfaces but especially on grass. He’s having a great grass-court season. I need to be at 100% to keep having chances.”

The pair have met twice at Wimbledon before, with Kyrgios stunning Nadal in the fourth round in 2014 on his tournament debut before meeting again five years later. That time the Spaniard triumphed against an irate Kyrgios, who spent much of the match audibly questioning Nadal’s speed of play.

Nadal has already won the Australian and French Opens this year and is bidding to become the first man since Rod Laver in 1969 to win all four Grand Slam titles in the same year.
(BBC)