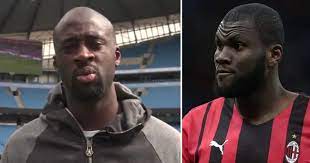 New Barcelona midfielder Franck Kessie has revealed he could not turn down the offer of playing for a “great coach like Xavi Hernandez” after his contract with AC Milan expired.

The La Liga side confirmed the signing of the Ivory Coast midfielder on a free transfer on Monday.
Kessie built up a reputation as one of the top midfielders in Italy over the last three years, taking his game to the next level after a permanent move to Milan from Atalanta in 2019.

The 25-year-old has now revealed why he could not turn down a chance to play for Barca.

“It is a great opportunity. I really want to start and do my best for this team,” Kessie told Mundo Deportivo.

“When a great coach like Xavi calls you, who has been a great player, you see that all your efforts have been worth it. I can’t wait to start working with him and with my teammates.”

Kessie scored 37 goals and provided 16 assists in 223 appearances for Milan, including those he earned during an initial two-year loan spell at the San Siro.

The midfielder was named in the Serie A team of the Year for 2020-21, and left the club on a high by helping them lift their first Scudetto in 11 years.

He has now explained why he wants to emulate his former national team colleague Yaya Toure.

“He [Toure] is a great footballer. I was lucky to be able to play with him in the selection and I would love to have a career as good as his,” he added.
Kessie was initially coached at Stella Club d’Adjame in Ivory Coast before leaving Atalanta. He has also played for Cesena, albeit on loan, from The Goddess before eventually joining AC Milan on loan then later on a permanent deal.

The midfielder will be unveiled on Wednesday, July 6.
(Goal)