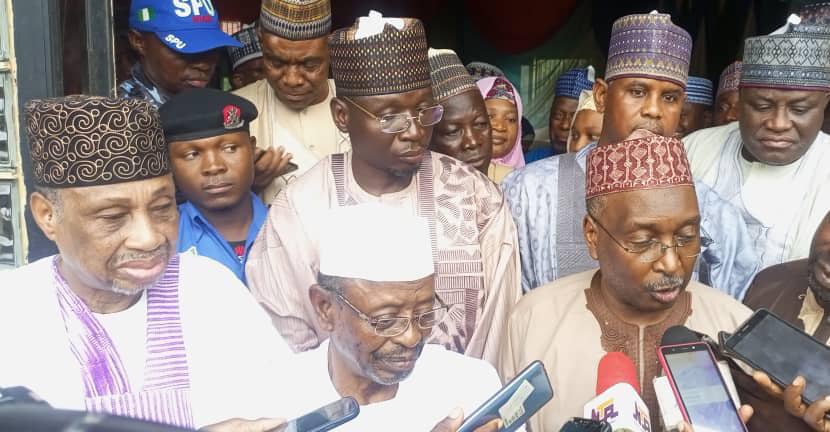 Kebbi – The All-Progressives Congress (APC), in Kebbi State, remains a united and formidable party that will clinch the 2023 elections in Kebbi State.

Kebbi State Governor, Abubakar Atiku Bagudu made these remarks while fielding questions from newsmen shortly after the national leaders of the party met in closed doors with stakeholders of the party in the state at the Presidential Banquet Hall in Birnin Kebbi on Monday.

The Governor, who was represented by his Deputy, retired Col. Samaila Yombe Dabai, said all the stakeholders were working assiduously towards strengthening the party ahead of the 2023 General Elections.

He debunked news making rounds that some aggrieved members of the party were planning to leave the party in the aftermath of the party’s primaries in the state.

The leader of the team, who is the APC National Vice Chairman, North-West Zone, Alhaji Salihu Luqman said their visit to Kebbi State was part of the tour of the seven states in the Zone sequel to the directives by the National Secretariat of the party to visit the Northwest states.

He said they would further hold discussions with APC supporters to listen to their views, in order to address the challenges facing the party.

This, according to him, is to work towards uniting the party ahead of the 2023 elections, to ensure party’s victory.

The National Zonal Vice-Chairman lamented that the aftermath of the APC primary elections in some states led to the defection of some APC members to other parties.

He expressed happiness with the formidable unity of the party in Kebbi State in spite of the cross carpeting by some politicians to another party.

Luqman expressed optimism that such act by some negligible few would not affect the chances of the party come 2023 General Elections.

He further averred that the large turn-out of APC stakeholders at the meeting was a testimony to the extant glaring unity and cohesion of the party in Kebbi state.

Luqman also said the committee would forward a formal report to the National Secretariat of the APC in Abuja after the completion of its exercise.

Earlier, the State APC Chairman, Alhaji Abubakar Muhammad Kana Zuru, in a remark said the discussions and consultations would further unite and strengthen the party in Kebbi State while thanking the members of the delegation for their efforts.

While stakeholders of the party are retired General Muhammad Magoro, the Secretary to the State Government, Babale Umar Yauri, Commissioners, Party Executive Members at State and Local Government levels, Local Government Chairmen, Special Advisers, a chieftain of the party, Na’Amo Abdullahi and the Chairman, APC Elders’ Forum, Alhaji Sani Hukuma Zauro, among others.