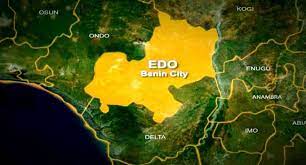 Edo State House of Assembly (EDHA) has passed the Local Government autonomy bill, initiated by the National Assembly for the consideration of the other 36 state assemblies.

At plenary, the Edo Assembly while considering the fifth alteration of 44 bill transmission of the Constitution of the Federal Republic of Nigeria, resolved into the Committee of the whole as moved by Hon. Okhuarobo and seconded by the Deputy Speaker, Rt. Hon. Roland Asoro.

Recall that the Edo State House of Assembly had, on two previous attempts, voted against Local Government Autonomy in 2012 and 2018 respectively.

Members dissected each altered bill one after the other and arrived at a unanimous decision to pass the amendment bill.

The Speaker, Hon Marcus Onobun, thereafter, requested that clean copies of the Resolution be sent to relevant agencies.

Similarly, the leadership of the National Union of Local Government Employees (NULGE) Edo State chapter has commended the leadership and members of the Edo State House of Assembly for living up to the people’s rating of their legislative duties.

NULGE, in a statement jointly signed by the State president, Adorolo Lazarus and the Secretary, Olumuyiwa Cole said “the step taken by the current Edo state house of Assembly for the quick consideration and passage of the bill is highly commendable”.

“While Nigerians await other state Houses of Assembly to join the progressive train, Edo House of Assembly has written its name in gold as the current and future generations of workers and people at the third tier of government will remain eternally committed to benefiting from the dividend of democracy the passage of the bill would bring”.

It expressed its “appreciation to Traditional Rulers in Edo State particularly the Akoko Edo traditional council chaired by the Otaru of Igarra Kingdom, his majesty Oba Emmanuel Adeche, the Onojie of Uromi for their consistent support and intervention during the struggle.

It also appreciated members of the fourth estate of the realm for being a dependable ally in the struggle for Local Government Autonomy.

The Union also appreciated the progressive and persevering efforts of NULGE members whose consistent agitation has yielded a positive result.