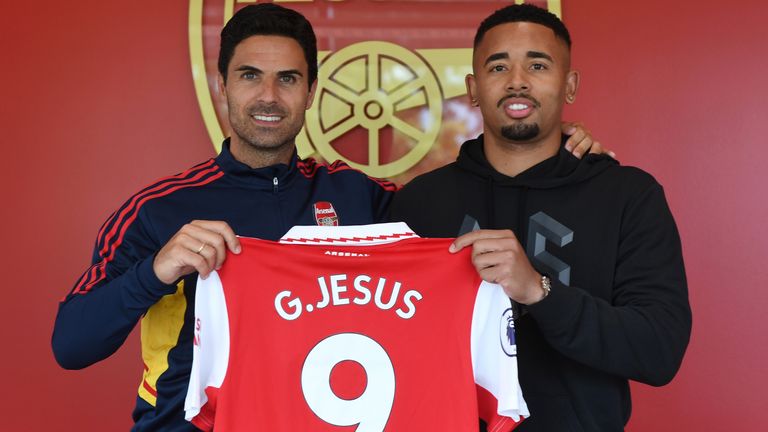 Arsenal have completed the signing of Brazil forward Gabriel Jesus on a long-term contract from Premier League champions Manchester City.

The fee for the 25-year-old is understood to be £45m and he moves to the Emirates after undergoing a medical and agreeing personal terms. Jesus will wear the No 9 shirt recently vacated by Alexandre Lacazette, who left for Lyon on a free transfer.

The Gunners put in nearly six months of work with Jesus’ representative Marcello Pettinati to ensure they were in pole position to recruit him from City this summer. He becomes the north London club’s fourth signing of the summer following the additions of Fabio Vieira, Matt Turner and Marquinhos.

Arsenal technical director Edu said: “We are delighted that we have secured the transfer of Gabriel. Everyone who knows football well, knows the qualities of Gabriel Jesus.

“Gabriel is a player who we have admired for a long time now. He is 25 years old and an established Brazil international who has consistently demonstrated that he is a player at a very high level. We look forward to seeing him join up with his new teammates ahead of the new season. We all welcome Gabriel to Arsenal.”
Mikel Arteta added: “I’m very excited. The club has done a tremendous job to recruit a player of this stature. I know Gabriel personally very well, and we all know him well from his time in the Premier League and being really successful here.
“This is a position that’s been on our radar for a long time now and we have managed to get a player that we all wanted, so I’m really happy.”
Jesus indicated his desire to move to the Gunners at the start of June and reunite with Mikel Arteta, who would regularly offer individual coaching and advice when serving as assistant to Pep Guardiola.

Arsenal’s strength of pursuit, the fact they were desperately in need of an attacker in his mould, and the opportunity for Jesus to assume more responsibility appealed to him.
The arrival of Jesus and the extension of Eddie Nketiah’s contract means the Gunners have options in the centre-forward role, with the north Londoners also welcoming Folarin Balogun back after his loan at Championship club Middlesbrough in the second half of last season.

Arteta and Arsenal let Lacazette leave the club when his contract expired at end of June, while they also allowed Pierre-Emerick Aubameyang join Barcelona on a free transfer on Transfer Deadline Day last January.
On leaving Man City, Jesus said: “It’s been a pleasure to play for Manchester City.

“I feel like I am a better player now than when I arrived – and to win 11 trophies has been amazing.

“My four Premier League titles are particularly special for me.

“I want to thank everyone at City – the manager, my team-mates and the fans – for all the support they have given me over the past five-and-a-half years.”
(Skysport)