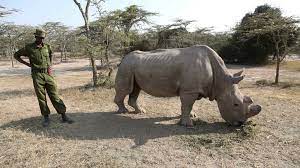 A Mozambican park welcomed its first white rhinos in 40 years on Friday after 19 of the threatened animals completed a 1,600-kilometre (thousand-mile) truck ride from South Africa, conservationists said.

The rhinos were reintroduced to Zinave National Park in southern Mozambique under an initiative to restore wildlife and boost the local economy.

Wildlife in the 4,000-square-kilometre (1,500-square-mile) haven was decimated by Mozambique’s decades-long civil war, which ended in 1992, and by poaching.

“The return of the rhino allows for Zinave to be introduced as a new and exciting tourism destination in Mozambique,” said Werner Myburgh, head of Peace Parks Foundation (PPF), the conservation group that led the project.

Zinave is now the only national park in Mozambique to house all “Big Five” African game animals — elephant, rhino, lion, leopard and buffalo — Myburgh said in a statement.

The rhinoceroses were hauled to Zinave from neighboring South Africa over several days in June, in what the PPF said was the longest-ever transfer of rhinos by road.

On Friday, some of the animals were released from their enclosures into a sanctuary featuring extra security to protect them from poachers.

The ceremony was attended by President Filipe Nyusi and Environment Minister Ivete Maibaze.

“The protection of biodiversity is a universal imperative and together we will continue to fight for the preservation of our natural heritage,” said Nyusi.

“Only then will future generations be able to enjoy the benefits of nature and join our mission of preserving our natural resources.”

The white rhinoceros is classified as near-threatened by the International Union for Conservation of Nature (IUCN) while its cousin, the African black rhino, is listed as critically endangered.

The PPF said it planned to more than double the park’s rhino population over the next three years, adding more from both species.
(Africanews)