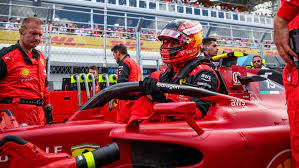 Carlos Sainz sealed his first Formula 1 victory in an astonishing British Grand Prix, as a frightening first-lap crash preceded an incident-packed race with Lewis Hamilton battling at the front, Charles Leclerc losing his lead late on, and Max Verstappen falling back with Red Bull damage.

A Silverstone spectacular started in dramatic circumstances as a multi-car crash saw Zhou Guanyu’s Alfa Romeo flip upside down and over the tyre barriers, with the Alfa Romeo driver thankfully unhurt after a trip to hospital.
After a red flag, pole-sitter Sainz twice looked to have lost his big chance behind Verstappen early on and Leclerc later, but a Safety Car played into his hands in the closing stages.

Hamilton was also right in contention in a Mercedes that was often fastest on track, but after some feisty battles with Sergio Perez was forced to settle for third place behind the Red Bull.

F1’s European season continues at pace with the Austrian GP next weekend – where we see the return of the Sprint. Qualifying is on Friday night before the Sprint race on Saturday, which sets the grid for Sunday’s race at 2pm.
Spielberg’s Red Bull Ring is the venue, where Red Bull and Max Verstappen enjoy huge support.
(Skysport)