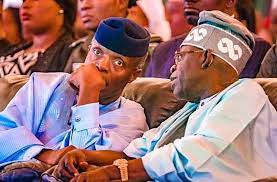 Since June 8th this year, when Asiwaju Bola Ahmed Tinubu emerged as the presidential candidate of the All-Progressive Congress, APC, for the 2023 presidential election, the issue of his running mate has remained tough and thorny, with terrible threats to the party’s tenacity.

While Tinubu says he is searching for a substantive running mate, after the name of Kabir Masari from Katsina State has been submitted to INEC in ‘place holding’ capacity, the media space is filled with all manner of stories, including the sponsored campaign that a Muslim from South-west cannot pick another Muslim from the north.

The northern Christians are advancing the argument for a balanced Muslim/Christian ticket. But Tinubu is a Yoruba Muslim in the south, and the position of Muslims in the south is arguably in the minority, just like the position of the Christian in the north. So, the argument of a Muslim/Christian ticket with Tinubu on board, would be confronted with the additional dilemma of minority/minority, which is a bigger burden that is likely to put the ticket at a more disadvantage.

Although Tinubu has maintained the stance that he is yet to decide on who becomes his running mate, names like Lalong, Shetima, Zulum and El-Rufai are resonating in a repetitive pattern.

I don’t have any quarrel with any of them becoming Tinubu’s running mate, and eventually Nigeria’s Vice President. My qualm is with the appropriateness of who amongst them is picked under the present political circumstances of Nigeria.

The opposition People’s Democratic Party, PDP, which introduced zoning as a way of promoting unity and national stability, in a country that is divided along religion and ethnicity, has disrespected that policy, by picking Atiku Abubakar, a northerner, as against a southerner, to fly the party’s flag for the 2023 presidential election.

The PDP arrangement makes it such that the presidential candidate is alternated every two terms, between the predominately Christian South and the predominantly Muslim North.

By reneging on the zoning arrangement, the PDP has goofed, and the stage is now set for the potential polarization of the contest, in a manner that would certainly split the votes along regional cleavages. South Easterners, who have been harping on the imperative of an Ibo president, would surely retaliate at the polls, to the disadvantage of the PDP.

Furthermore, by ditching Governor Wike in the game plan for the running mate, the fate of his awaited decision, would definitely affect the destiny of the party, come 2023.

It now behoves on the APC and Tinubu, to be thoughtful and tactful in arriving at the choice of a running mate. If the APC has an arrangement on the zone from which the Vice President should emerge, that arrangement should be respected, and respected fully but tactfully. The party stands to gain from the miscalculations of the PDP.

Unconfirmed reports are saying that Asiwaju has narrowed the search for the running mate to between Kashim Ibrahim Shetima, the former Governor of Borno state, and the present Governor of the state, Professor Babagana Umara Zulum. Both are Muslims from the north east, which means the ticket is going to be a Muslim/Muslim ticket.

Either of the two is good, but Zulum is better for a number of reasons, with the least reason coming from his boss, the same Kashim Shetima. In an interview with the Daily Trust, Shetima said Zulum is a gift from God to Borno state, and indeed Borno State got it right with him.

When asked about the reason for his respect for Zulum and the cordial relationship between them, Shetima said, “A Russian writer and philosopher, Leo Tolstoy or so once wrote in his wisdom that the two most powerful warriors in life are patience and time. As a human being, I have many shortcomings, but one of the strengths Allah has given me is patience and the anticipation and acceptance of time. Oftentimes, one mistake we mostly make as humans is to deliberately ignore times that we all know will surely come to pass.

From May 29, 2015, when I was sworn into office for the second term as the governor of Borno State, I initiated my search for a successor, and by September 2016, I started narrowing down my list, purely based on performance. By December 2017, I had a potential successor in mind. I was only waiting for how to actualise it. The day Professor Zulum became the candidate of the APC in October 2018, I no longer thought of myself as governor of Borno.

I began to involve him in most decisions I was taking and I increased his involvement when he became governor-elect. Many times, if I asked him to take decisions, he would insist I was still the governor and I would also insist he was to be affected by any decision, so he needed to be part of it”.

By this submission, Shetima is saying Zulum is loyal and an obedient performer. Impliedly also, he is saying that although he is eminently qualified to be picked as Tinubu’s running mate, if Zulum is ordained to be, he would not contest with the choice of God, because he is a man of patience, with respect for time.

When confronted with an almost similar scenario on the choice of a running mate for Buhari in 2015, Tinubu sacrificed his ambition in favour of Professor Yemi Osinbajo, his one-time commissioner of Justice.

So please, let history be repeated. Let Shetima give way to Zulum, like Tinubu gave way to Osinbajo. It would be a handing over of office, from a professor to a professor.

Malikawa urges sports journalists to do more in discharging their responsibilities