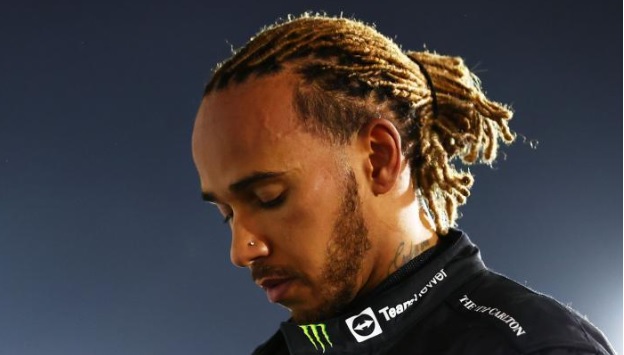 Lewis Hamilton said he had a “good day” after setting the second fastest time in Friday practice at the British Grand Prix.

He was 0.176 seconds slower than pace-setter Carlos Sainz’s Ferrari, ahead of McLaren’s Lando Norris and Red Bull’s Max Verstappen.

Mercedes have introduced a number of aerodynamic upgrades that they hope will reduce their deficit to the pace.

Hamilton said the team had “definitely made an improvement”.
However, he added that the car was still suffering with its major affliction – “bouncing” – through the high-speed corners.

The seven-time champion said: “It’s bouncing still, quite a bit. Not necessarily on the straights but then through the corners it’s pretty harsh – not physically harsh but in the car on the tyres and everything.

“So we still have work to do but it feels like a small step forwards.”

Hamilton’s team-mate George Russell was less happy down in eighth position, struggling to get the best out of the car in qualifying trim.

The times are unlikely to reflect true competitiveness, not least because Ferrari’s Charles Leclerc, who has six pole positions in nine races this year, did not appear to set a representative time on his qualifying simulation run.

Leclerc was fastest on the first runs in the session but barely improved on the softer tyres, while Sainz gained 0.5 seconds.

Leclerc ended the day fifth, ahead of Alpine’s Fernando Alonso.

In race trim – in front of 106,000 people – Hamilton set an average pace that was more or less an exact match for Leclerc’s on the same medium tyres.
And Mercedes head of trackside engineering Andrew Shovlin said: “It does look like we’ve made a step forward, because we’re not normally up near the top on a Friday.

“I suspect there will be a bit more to come from Ferrari and Red Bull but the long-run pace was quite encouraging as well.

“Normally we see the sort of gap, half a second maybe even 0.7-0.8secs on a long run and that didn’t look like it was there.

“Probably a bit is the circuit suiting the car. There is a lot to work on – it is bouncing around and it’s tricky in the high-speed – but hopefully the updates pushed us in the right direction.”

Red Bull and Sainz ran the ‘soft’ tyre on the high-fuel runs, and on that the Ferrari was very slightly quicker than Verstappen, who complained his rubber wore out after just two laps.

Norris, for his part, said he was “happy the car seems to be in a decent place – a little better than we were expecting”.

Mercedes are one of several teams to have introduced significant technical developments at Silverstone as they seek to improve their performance.

The world champions have extensive revisions to their so-far recalcitrant W13 car, centering on a new floor design that they hope will limit the “bouncing” that has afflicted the car so far this season and restricted its pace.

Mercedes anyway expected the track characteristics at Silverstone to help them make up some ground on front-runners Red Bull and Ferrari. The surface is smooth, which should limit their bouncing problems, and there are few slow corners to exacerbate the car’s other big weakness.

Red Bull and Ferrari also have upgrades for the weekend – both have a new engine cover aimed at improving airflow to the rear and increasing downforce.

Verstappen spent the session complaining about a strange noise from the car but as yet Red Bull have given no indication as to what might be causing it.

Williams, the slowest team on the grid, have perhaps the biggest upgrade, with Red Bull-inspired side pods, while Alpine have a new floor as well as redesigned bodywork.

Alex Albon, the only Williams driver to have the new parts, was 14th fastest.

Before a wet first practice – in which Alfa Romeo’s Valtteri Bottas was fastest – Hamilton agreed to remove his nose stud as part of rules from the sport’s governing body the FIA asking drivers not to wear items of jewellery in the cockpit.

Earlier in the season, Hamilton had said he was opposed to removing his nose stud, after he said he could not easily be taken out.

But he complied after his second medical exemption expired on Thursday.