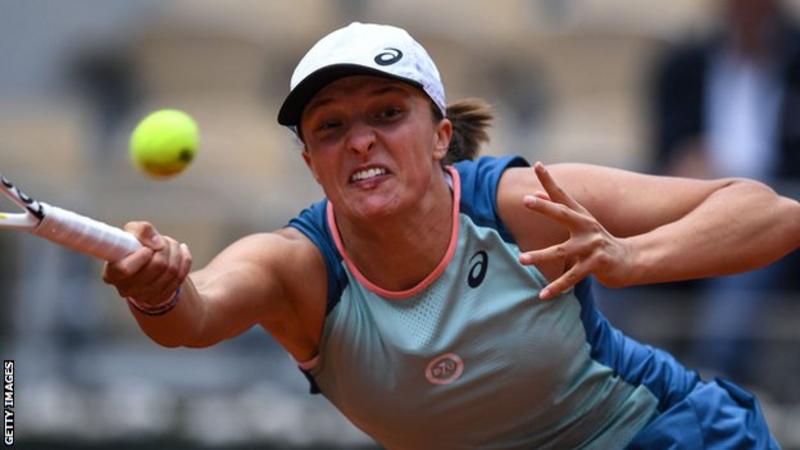 World number one Iga Swiatek saw her 37-match winning streak ended as France’s Alize Cornet caused one of the biggest upsets so far at Wimbledon.

The 21-year-old from Poland was beaten 6-4 6-2 in an inspired performance by 37th-ranked Cornet.

Cornet, 32, kept her composure to streak towards a famous victory.

Coco Gauff was also knocked out as fellow American Amanda Anisimova fought back from a set down to reach the fourth round for the first time.

Swiatek has become the dominant player on the WTA Tour this year, having won her sixth tournament in a row at the recent French Open.

Her previous defeat came back in February when she lost to Jelena Ostapenko in Dubai.

The streak enabled her to take over from the retired Ashleigh Barty as the world number one, with her recent success giving her a considerable lead at the top of the rankings.

Despite winning the girls’ title at the All England Club in 2018, Swiatek admits she does not feel as comfortable on the grass as the clay and hard surfaces.

“I know I didn’t play good tennis. I was pretty confused about my tactics,” said Swiatek on what wrong against Cornet.

“As a solid player, she used that pretty well. For sure, it wasn’t a good performance for me.”
The two-time French Open champion did not play a tournament on grass before going to Wimbledon, citing a shoulder injury as she pulled out of Berlin.

Taking a break to recover mentally from her exploits at Roland Garros was important to Swiatek, but her lack of confidence on the grass showed in a performance which lacked fluidity.

“Let’s just say that I didn’t feel like I’m in a best shape. So I’m kind of aware that this could happen.

“I tried many things to feel better on court, on grass court, but it didn’t really work out.”
Cornet knew of her opponent’s relative fragility on the surface and took full advantage with a performance packed with quality and variety.

“If there is a moment to beat her it is now, on grass she feels a little less comfortable than other surfaces. I was much focused.”

The victory was underpinned by a strong start where she led 3-0 and an even stronger finish as she rattled off the final six games.

It was another glorious upset for Cornet on Court One, having beaten then world number one Serena Williams in the same round in 2014.

“I have no words right now, it reminds me of the time I beat Serena here on the same court, eight years ago,” she said.

“This court is a lucky charm for me.”

Cornet had considered retirement earlier this year, but said after beating Swiatek she remained motivated to continue playing.

“I’m like good wine, in France good wine always ages well, that’s what’s happened to me,” said Cornet, who reached the first Grand Slam quarter-final of her career at this year’s Australian Open.

“It’s unreal. I’m playing one of the best seasons of my career, I feel great on the court.

“I’m having so much fun, I feel good physically. I still have the fire in me.”
Anisimova, making her Centre Court debut, took control in the final two sets as she wrapped up an impressive 6-7 (4-7) 6-2 6-1 win.

The 20-year-old has reached the last 16 of all three Grand Slams this year.

It is the first time that French Open runner-up Gauff, 18, has not reached the fourth round at Wimbledon.

“This is the most special day of my career. It’s just a huge privilege to play on this court playing Coco,” said Anisimova, who fell backwards onto Centre Court in celebration afterwards.

“She’s an amazing player, got to the final of a Grand Slam so I wanted to soak up the moment. Winning is so special, especially in front of a full crowd.

“The worst thing for a tennis player is to lose 7-6 in the first set. I had the same experience in the French Open, but it’s important to bounce back and give everything you have.

“Although it was extremely exhausting, I pushed through and was so happy to get the win.”

However, Tan has been in great form in these Championships. She defeated seven-time Wimbledon singles champion Serena Williams in round one, eliminated Spain’s 32nd seed Sara Sorribes Tormo in the second round and thrashed Britain’s Katie Boulter 6-1 6-1 earlier on Saturday.

Anisimova made a nervous start on Centre Court, losing the opening three games, although she then won four in a row and was a break up before Gauff fought back to force the tie-break.

Despite holding a 4-1 lead in the tie-break, Anisimova, who made 26 unforced errors in the opening set, fell a set behind.

However, she showed great strength of character as she drastically reduced her mistakes and began to take control, dictating rallies with her power and precision and moving Gauff around.

Anisimova clinched the second set by breaking Gauff’s serve to love in the eighth game, and then dominated the decider.

Anisimova and Gauff had been two of the four Americans to reach the third round of the women’s singles, while eight players from the United States were in the last 32 in the men’s singles.

“There are so many American players doing well and I’m proud of my country and how we have been doing,” added Anisimova. “It was really exciting to have an all-American clash on this court so it was really special.”
(BBC)