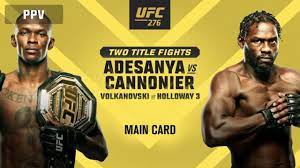 ‘I had to put a light mill on my brother.’ – Drake bets 1 million on Adesanya to beat Cannonier.

The 32-year-old Adesanya is set to face off against Jared Cannonier in the headline event of the Ultimate Fighting Championship (UFC) 276.

Ahead of the fight. Adesanya had support from Canadian rapper, singer, and actor Aubrey Drake Graham.

Drake decided to bet on Adesanya to beat Cannonier to retain his UFC welterweight title.

Drake had a facetime call with Adesanya to inform him of a one million dollar bet he made.

The message said, “One of the most inspiring guys to me…the death note author himself and my partner with @stake @stylebender BIG FIGHT TMRW…got a million on it.”

Speaking to Adesanya, Drake said, “I already know what time it is.”I put a light million up. I wasn’t playing.

“I had to put a light mil up on my bother. The return on investment is a lock.”

Adesanya who has vowed never to fight again in New Zealand did not seem bothered of the hefty sum bet on him to win.

Adesanya takes on Cannonier in the early hours of Sunday, July 3, 2022.