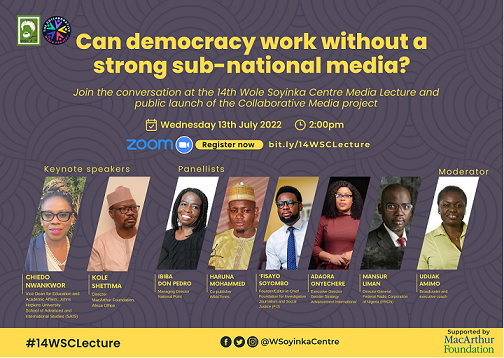 Discussions about the roles of media at the sub-national levels of government will take the centre stage at the 14th edition of the annual Wole Soyinka Centre Media Lecture Series themed – ‘Can democracy work without a strong sub-national media?’, which will hold as a webinar on Wednesday 13 July 2022 by 2 pm (WAT).

The event will also serve as the public launch of the Collaborative Media Engagement for Development Inclusivity and Accountability (CMEDIA) project of the Wole Soyinka Centre for Investigative Journalism (WSCIJ).

The saturation of media at the centre and the lack of accountability at the state and local government levels, even as the nation heads for the 2023 general elections, informed WSCIJ’s choice of the theme to draw attention to the need for an independent media holding government to account at the sub-national levels towards a vibrant and thriving democracy. The lecture event will mark the 88th birthday of Wole Soyinka, the grand patron of WSCIJ.

The Collaborative Media Engagement for Development Inclusivity and Accountability (CMEDIA) is a multi-level intervention for media independence and government accountability supported by the MacArthur Foundation. It is working through 26 partner organizations to improve public awareness and the ecosystem for transparency, accountability and good governance and amplify marginalized voices especially at state and local government levels and in the private sector.

Interested participants may register for the webinar with this link to join the discussion which will include the media, industry experts, private sector leaders, government ministries and agencies, pressure groups, policymakers, students, members of the diplomatic corps and other stakeholders in the civil society.

The Wole Soyinka Centre for Investigative Journalism (WSCIJ) is a not-for-profit, non-governmental organization with social justice programs aimed at exposing corruption, regulatory failures and human rights abuses with the tool of investigative journalism.

The change in name became necessary to reflect the intention of the coordinators to embrace a more robust line of activities; such that have a greater capacity for engendering the appropriate values of investigative journalism in the Nigerian media environment.

I supported the move