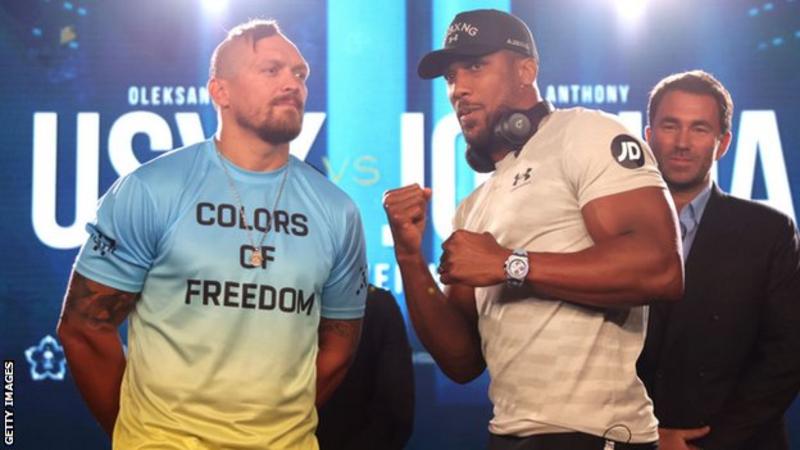 Promoter Eddie Hearn has defended the decision to stage Anthony Joshua’s rematch with Oleksandr Usyk in Saudi Arabia in August.

The Gulf country has faced accusations of human rights violations and is paying huge sums to host the event.

Hearn responded to the criticism, saying: “My job is to provide the best opportunities for these fighters.

“But of course we want to see a better place, more change and hopefully this can promote that.”

Joshua, 32, fought in Saudi Arabia in 2019 when he beat Andy Ruiz in their rematch and returns to the country once again for the fight on 20 August with his career at a crossroads.

Hearn promotes Joshua and was the first major UK promoter to stage a fight night in Saudi Arabia, but has not returned since.
At the time, Amnesty International’s Felix Jakens described Ruiz v Joshua II as a “sportwashing” exercise for Saudi Arabia, saying: “They’ve got an appalling record on LGBT rights, women’s rights, extra-judicial killings, beheadings, the murder of journalist Jamal Khashoggi [in 2018], and their involvement in the ongoing conflict in Yemen.”

In March Saudi Arabia executed 81 men in a single day.

Joshua was asked by BBC Radio 5 Live about the controversial nature of staging a contest in Saudi Arabia, the British heavyweight responding by opting to focus on the growth of boxing in the region.

“Since we were last there, boxing has grown 300% and they’ve opened 49 boxing gyms in the region and had their first women’s championships as well. So it’s been a positive in my opinion,” he said.

‘We see the change there’ – Hearn
Boxing is not the only sport to face questions about working with Saudi Arabia.

Formula 1, tennis and golf have all held events in the country in recent years, while the Saudi-funded LIV Golf tournament took place on the outskirts of London with players accepting huge appearance fees to take part.
Hearn echoed his fighter’s comments, saying he had seen “substantial” change in the region since 2019.

“Now we have to deal with a bigger social issue which is change.

“We see the change there. I was in Saudi Arabia, Jeddah last week, and the change from what I see in that country from two years ago with the Andy Ruiz fight is substantial.

“Our government could learn a lot from the way Saudi are investing in the grassroots of boxing there. It’s up over 300% participation in amateur boxing clubs since the Ruiz fight.

“There’s a genuine interest in the sport. Does there need to be more change? Loads of it. Is there change? I see it.”
(BBC)