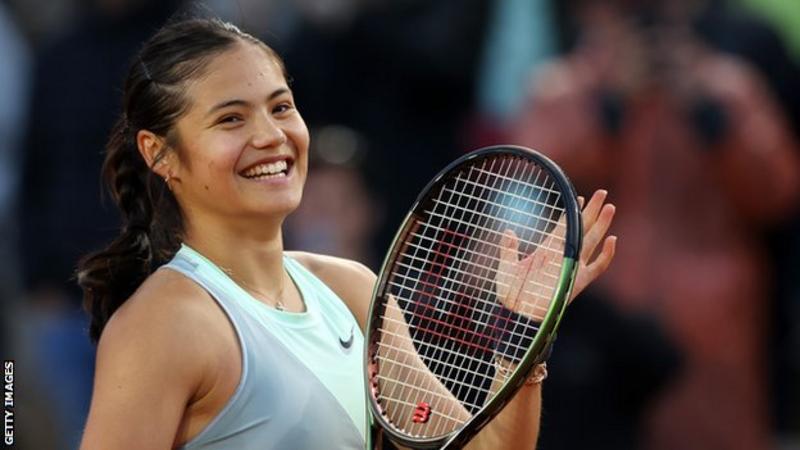 Emma Raducanu says she will continue to “embrace every single moment” as she remained upbeat after a straight-set exit at Wimbledon that left Centre Court deflated.

The 19-year-old Briton was outpowered by France’s Caroline Garcia in a 6-3 6-3 defeat in the second round.

Raducanu’s preparations for her home major were disrupted by a side strain, which left her participation in doubt.

“For me, everything is learning,” said Raducanu, who was seeded 10th.

Raducanu has not won successive matches at a Grand Slam since her remarkable triumph at last year’s US Open.

She conveyed positivity in her post-match news conference, adding: “Caroline is a great player. I struggled to find a way through her.

“But it’s OK because coming into this I didn’t really have many expectations of myself.

“I’ve played seven hours of tennis in a month. To even compete with these girls at this level and win a round I think is a pretty good achievement.”
Garcia was always going to be a tough opponent and Raducanu was unable to cope with her aggressive play.

Raducanu’s build-up for her first Wimbledon since becoming a teenage Grand Slam winner was in stark contrast to Bad Homburg champion Garcia’s preparations.

Hampered by the injury, Raducanu played only seven games before retiring in her sole match at the British grass-court events leading up to the All England Club.

While Raducanu looked solid in her first-round win against Belgium’s Alison van Uytvanck, she struggled to deal with the aggressive approach favoured by Garcia – who was once touted as a future world number one by Murray.

“Since the French Open, the biggest thing has been my time on court has been extremely minimal,” Raducanu said.

“I really did not train very much. That’s due to different sorts of niggles and things that have been lingering around.

“That’s obviously something I’m going to be focusing on, getting my body ready and just playing tennis basically.”

Raducanu has attempted to dampen the expectation placed on her in what was only her second Wimbledon appearance, reminding those more casual fans who only tune in for one of Britain’s hallmark events that she is still 19 and at the start of her career.

But the affection for her and amazement about what she achieved in New York meant it was inevitable the home support was desperate to see more success for the teenager.

Against 28-year-old Garcia, an experienced professional once ranked as high as fourth in the world, it was a reminder of the work she still has to do.

Raducanu unable to cope with Garcia’s aggressive approach
In interviews after her first-round win, Garcia often used the word ‘aggressive’ when talking about her game plan against Raducanu and she proved true to her word.

Garcia’s depth and pace of ball caused issues for Raducanu, whose time was further reduced by her opponent’s willingness to come forward to the net.

The British teenager was unable to adapt her game to cope and, after the pair exchanged breaks early on, Garcia took her serve again for a 4-2 lead in the opening set.

After a crescendo of encouragement from the home fans, Raducanu saved a set point at 5-2 but then could do little to stop Garcia serving out to clinch the opening set in 39 minutes.

A crosscourt backhand winner from Raducanu set up a first break point of the second set, leading to a feisty shout of ‘Come on!’ from the Briton.

But her hopes of securing an early break were dashed when Garcia found her spots with her serve to clinch the hold.

Raducanu lost serve for 3-2 and immediately broke back, but a double fault at deuce 3-3 proved costly.

That felt like the moment when the belief drained from both player and fans.

Garcia took the lead when Raducanu dragged wide a backhand and, after fighting off resistance to hold, broke again with a crosscourt backhand winner from behind the baseline to seal victory.

She looked up to the heavens and screamed her delight, with the sound of respectful, if unenthusiastic, applause ringing in her ears.

“I prepared for this match really well. Emma is a huge player and in her home tournament,” said Garcia, who faces China’s 33rd seed Zhang Shuai next.

“I won a title in Germany but you have to start all over again.

“That is what is nice about tennis – we all start from zero and we have to go for it.”
(BBC)