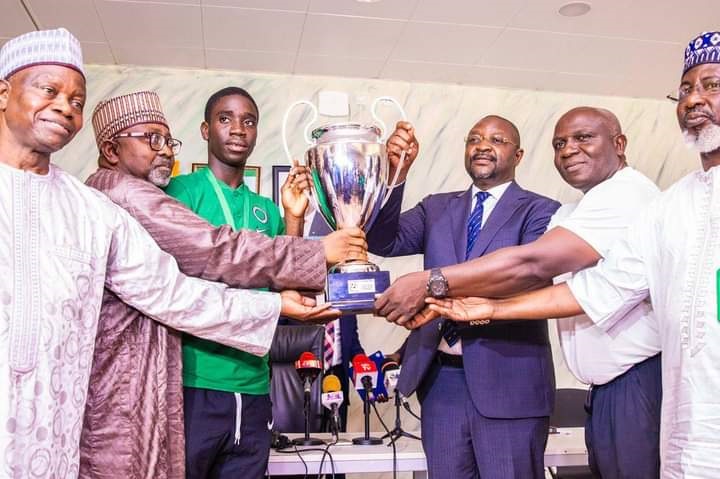 The Director of Press and Public Relations, Mohammed Manga, in a statement on Wednesday, said Mr. Sunday gave the commendation at the Moshood Abiola National Stadium recently when he hosted the players and officials of the victorious U-17 boys, National team in Abuja.

According to the statement, the Minister eulogized the team spirit of the players, saying “it culminated in the victory and has made the country proud.” Playing and winning for a country of over 200 million citizens is not a mean feat but a bust”.

He reiterated the present administration’s commitment to youth and sports development in the country. Assured that government would continue to focus on grassroots sports with the view to ensuring positive results, and further building for the country formidable teams in all types of sports to represent the nation at international competitions.

The Minister heaped plaudits on the leadership of the Nigeria Football Federation (NFF) for making merit and competence, especially in its watchwords in the selection of coaches for the age-grade National Teams, in agreement with the Ministry.

Adding that, it has started to bear fruits with excellent performances at U20 and U17 levels.

“You have set a high standard and cannot lower it; Nigeria has won the trophy 4 times and hopefully might win it again. All you need is to remain focused hard-working and obedient to the coaches and avoid distraction.

“I want to give credit to the NFF for implementing the cardinal principles that we discussed at meetings on youth football development. Now, we can see that the emphasis on merit and competence has started to bear fruits”.

He further revealed that the U17 and U20 girls have qualified for their FIFA World Cup competitions with aplomb and also the U17 and U20 boys have emphatically won regional tournaments, with promises of what we can look forward to at their African championships next year.

“Our hard focus as a government on grassroots development in all sports will continue. I congratulate the players and the coaches of the Golden Eaglets for winning so convincingly in Ghana and I want to charge you to remain focused on the continental championship to get the ticket to the World Cup. For you players, you must stay humble, hardworking, and obedient to your coaches”, he said.

Earlier in his remarks, the Permanent Secretary Alhaji Ismaila Abubakar commended the players for writing the name of the country in gold in the continent.

He warned the players against allowing distractions from all manner of agents and player-managers, but rather be dedicated to improving their craft with temperance, endurance, and a level head.

The Permanent Secretary announced a cash reward of N2m (Two Million Naira) for the team owing to their exemplary performance at the tournament.

The statement revealed that the Secretary-General, Nigeria Football Federation, Dr. Mohammed Sanusi while presented the players and the team to the Hon. Minister Dare, stated that Head Coach Nduka Ugbade was the captain of the first Nigeria team to win the FIFA Cadet World Cup (CWP) and was also assistant coach to Manu Garba when Nigeria triumphed in the United Arab Emirates in 2013.

“He is also a global consultant on football science”, he said.

Speaking on behalf of the team, the Head Coach Nduka Ugbade disclosed that football has gone scientific and there is, therefore, the need for an early campaign as the team guns for its world cup ticket.

He, therefore, described the reception as a special occasion and said the team is encouraged to do its utmost best to continue to bring honor to the nation, “first by putting up a stellar outing at the U20 AFCON in Algeria and then going on to hold its own at the FIFA World Cup finals in Peru.”