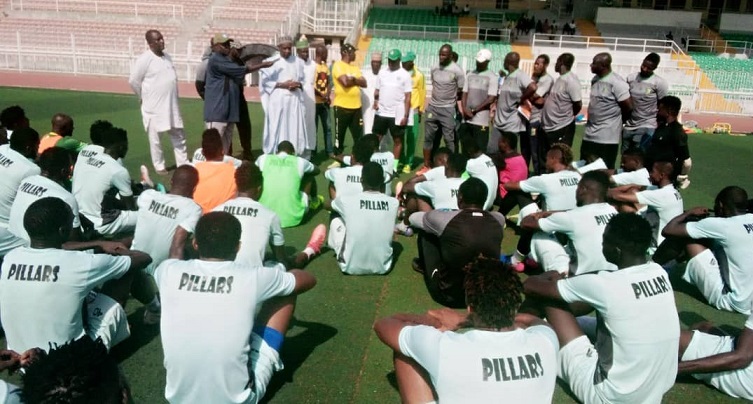 Galadima pledged on Thursday while addressing players and the technical crew of the club during their training session at Sani Abacha Stadium Kofar Mata Kano.

The Acting Chairman who doubles as Chairman Kano State Sports Commission said he was at the training ground to address the players and officials of the club and notify them of the task ahead in the ongoing 2021/2022 Nigeria Professional Football League Season.

He said he would offset some of the outstanding bonuses of the players to motivate them so that they can redouble their efforts and win the remaining three matches of the season to revive the glory of the club.

“I know there are problems militating against the team but put it behind you and do the needful in the remaining matches; the Kano state government is solidly behind you,” Galadima said.

He pointed out that he will do whatever humanly possible to ensure that all entitlements of the players and other staff of the club would be given priority for them to have a conducive atmosphere in discharging their responsibilities effectively.

Galadima who is the founder of the “Sai masu gida” in 1990 commended the government of Kano state and teeming fans of the club for their financial, moral, and spiritual support to the team and urged them to sustain the tempo.

Responding to the Technical Adviser of the Club, Salisu Yusuf congratulate Galadima for a well-deserved appointment and promised that the team would not let the government and people of Kano state as well as the entire supporters of the club down at the end of the season.

It could be recalled that on Wednesday, Governor Abdullahi Umar Ganduje sacked Alhaji Surajo Shaaibu Yahaya Jambul as Chairman of Kano Pillars and appointed Alhaji Ibrahim Galadima in Acting capacity before the appointment of substantive Chairman of the club.