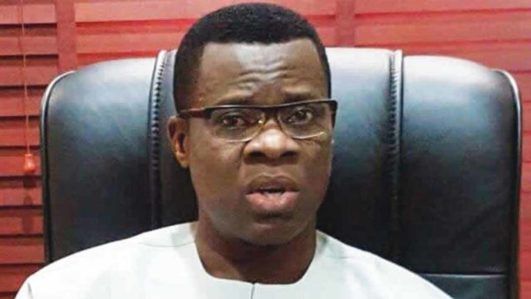 The group in a statement released on Wednesday 29th June said that the State REC has derailed from his primary assignment.

In the statement, Comrade Benson Iheanacho, the South-South Coordinator of the group, stressed that Mike Igini has exposed himself as a corrupt and biased umpire.

Part of the statement reads.

“Mike Igini has constantly shown his hatred for the All-Progressives Congress (APC) in Akwa Ibom State. His actions and utterances show a clear case of bias and disloyalty to the ethics of fairness in democracy.

“A REC who is constantly on media platforms, openly taking sides in a game where INEC should be an unbiased umpire, shows you his heart and this poses a danger to our fragile democracy.

“We are calling on INEC and all stakeholders in the Nigerian dream to scrutinize his actions and inactions, question his source of income, and sack him if he’s found wanting.”

The group also alleged that the Akwa Ibom State REC has been compromised and has questioned his source of wealth.

“Mike Igini is always very vocal when he’s in front of a camera, but discreet when it comes to his source of wealth.

“A REC who is currently building a massive edifice, to house his chambers in the Ikorodu area of Lagos State, obviously has some questions to answer.

“A REC who owns the biggest shopping mall in Lekki Phase 1, has some questions to answer.

“We call on all agencies with the responsibility of curbing corruption in the electoral system to beam their light on Igini as he has not just shown his commitment to a particular political interest, he has also acquired a lot of wealth over the years. The wealth that cannot be traced to any legitimate transaction.”

In recent days the Akwa Ibom State REC has been in the news for various reasons.

He has openly challenged a High Court ruling on the APC congresses in the state, kicked against the APC’s duly elected State Exco, and attempted to alter the list of duly nominated APC candidates in the upcoming general elections.

This has raised concern in many quarters; Just recently the South-South Zonal Zonal Organizing Secretary of the APC, Dr. Blessing Agbomhere has called for the sack of Mike Igini over the role he played in the controversy rocking the APC governorship and senatorial primary elections in Akwa Ibom State.

Also, various youth bodies have protested in the State capital, calling for the resignation of the REC due to his interference in the activities building up to elections in Akwa Ibom State.