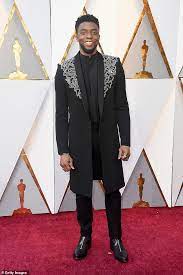 The actor unexpectedly succumbed to colon cancer in 2020, due to his unforeseen demise, there was no will left behind to guide the family on how to handle his fortune.

Boseman’s estate was originally valued at $3,881,758, according to court documents, but after the large funeral bill and lawyer fees the amount came down to $2.5 Million plus $157,000 in cash.

Accountability for the $2 Million
The widow, Ledward-Boseman produced documents with an account of all expenses incurred following Boseman’s death, asking to be reimbursed.
The funeral costs amounted to around $50,000 including the purchase of a piece of land close to the actor’s resting place at Forest Lawn Memorial Park, where his parents will be laid.

The actor’s company, Chadwick Boseman, Inc. allegedly owed a tax fee worth $51,000 and $900,000 was spent on a bond for a probate case. The remaining $2.3 Million will be split between the two parties with $1.15 Million each.
It is said that the large sum in legal fees would have been avoided had Boseman drafted up a will. Taylor Simone Ledward and Boseman secretly tied the knot in 2019 three years after he was diagnosed with cancer.
They had been together before the actor’s diagnosis.
At the time of his death, Boseman had appeared in the Marvel high grossing superhero movie “Black Panther”, Black-American historic films ’42’, ‘Ma Rainey’s Black Bottom’, ‘Get On Up’ and ‘Da 5 Bloods’.
(Pulse)