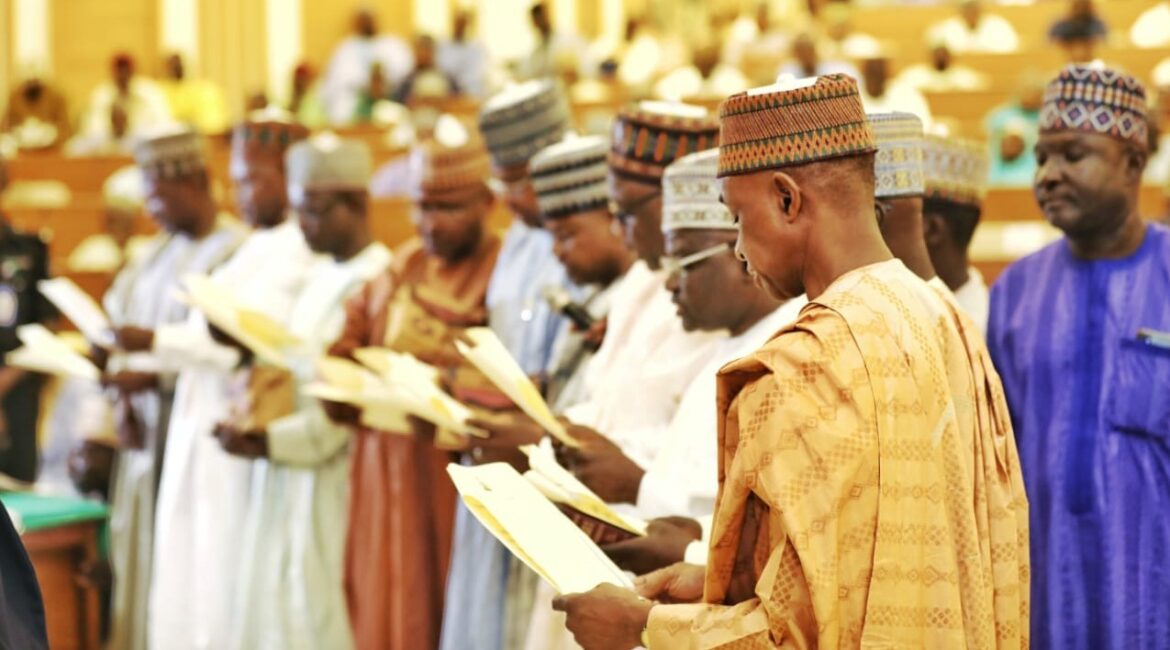 With Monday’s deployment of 19 commissioners to various ministries in Borno State, a total of six professors currently serve under the administration of Professor Babagana Umara Zulum as Governor.

The latest addition is Professor Mohammed Arab Alhaji who was deployed as commissioner of health, making him the first Prof (at least since 1999) to head Borno’s healthcare sector.

Zulum’s five professors are discussed at the bottom of this story.

The Governor had yesterday presided over the swearing-in of the commissioners.

The event was held at the overhauled International Conference Centre of the Musa Usman (workers) secretariat in Maiduguri.

Zulum had nominated 20 but the State Assembly cleared all 19 who appeared before it while the remaining nominee, Zuwaira Gambo, was out of the country for an official engagement, at the time her colleagues appeared before the Assembly.

Borno’s SSG, Usman Jidda Shuwa, shortly after the swearing-in, released deployments of the 19 Commissioners as directed by Zulum.

Deployed to the Ministry of Health as Commissioner, was Professor Mohammed Arab Alhaji, a Medical Doctor, who specializes in gastroenterology, paediatrics, hepatology and nutrition. He headed Paediatric Gastroenterology, Hepatology and Nutrition/ Infectious diseases specialist clinics at the University of Maiduguri Teaching Hospital, UMTH.

Governor Zulum had in September 2020, appointed Arab as Chief Medical Director of the Borno State Hospital Management Board, before recently appointing him as Borno’s first Professor-Commissioner of Health.

Professor Arab was a resident doctor in Ibadan and Kaduna. He had served in more than 20 Technical Committees and as Facilitator/Investigator to several Government and Non-Governmental Organizations (NGOs)’s programs associated with the Federal Ministry of Health, Borno State Government, the World Health Organization (WHO), United Nations Children’s Fund (UNICEF), Alliance for International Medical Action (ALIMA) among others.

Aside from Arab’s deployment to Health, 18 highly competent and well-educated Commissioners were assigned to different Ministries.

With yesterday’s deployment of Professor Mohammed Arab Alhaji as Commissioner of Health, there are now six professors working with Governor Zulum.

These professors, all from the University of Maiduguri, include Professor Isa Marte Hussaini who is the current Chief of Staff to the Governor.

Marte, a professor of pharmacy was previously appointed Commissioner of Higher Education in 2019, Governor Zulum before his elevation to Chief of Staff in August 2020 following the death of Dr. Babagana Wakil, who was Chief of Staff.

Professor Bulama Kagu is Chairman of the Borno State Universal Basic Education Board, appointed by Zulum in October 2021.

Kagu is a Professor of Education.

Zulum also works with two Professors he nominated to contest Chairmanship elections under the administration.

The two are Professor Adamu Alooma, and Professor Ibrahim Bukar. They contested Chairmanship under the APC in 2020 and won.

Alooma is Professor of Banking and Finance and is current Chairman of Damboa Local Government Area in southern Borno.

Bukar is a Professor of Education and is current Chairman of Gwoza Local Government Area also in southern Borno.