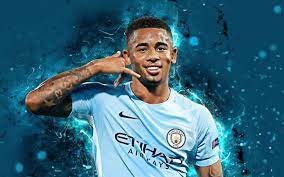 The Angel Gabriel is a hard-working, versatile, big game player who can answer the Gunners’ prayers…

The Brazilian was Mikel Arteta’s priority attacking target and there is, quite rightly, plenty of excitement around his imminent arrival at the Emirates.

So, below, GOAL looks at what can the Gunners expect from a player that became a sensation when he joined City as a teenager and then dazzled, but occasionally frustrated, in the intervening years…
Jesus has been deployed all across the front three during his time at the Etihad Stadium because of his excellent all-round game.

Whether tasked with being a ball-carrier, a battler or a box of tricks, Jesus has nearly always delivered exactly what Pep Guardiola has asked of him.

Even as a No.9 there was a malleability to his game, whether he was charged with primarily playing as a six-yard box predator, a spearhead against teams trying to press high or dropping deep as a false nine, creating space for midfielders.

Similarly, he has been effective in different roles when playing wide. He has delivered as an old-school winger, hugging the touchline, an inside forward playing off a central striker or as an attacker charged with supplementing the midfield.

His time at City can be characterized by an unselfishness that has always put the team ahead of any personal glory.
Ever since his first start in a 3-0 victory over Crystal Palace in January 2017, Jesus’ hard work has stood out as a key attribute.

Guardiola has wanted his team to press opponents high up the pitch and that starts with the striker putting central defenders under pressure.

Jesus, to his credit, instinctively knew what was required and that immediately put the place of legendary striker Sergio Aguero under threat.

The Argentinian came alive when City had the ball, but he was not always the most effective when the opponents were controlling possession.

Aguero learned from his young team-mate, though, and his increased work-rate, coupled with his incredible strike rate, meant that he remained City’s first-choice centre forward, although Jesus still got the call when hard graft was essential, as in the stunning Champions League win over Real Madrid in 2020.
Guardiola has often turned to Jesus for big games and has been rewarded with important performances and goals.

The victory over Madrid at the Santiago Bernabeu was a landmark moment for City’s rise in the Champions League, beating one of the elite on their own patch, with Jesus instrumental, scoring an equaliser in a breathless performance.

Last season, he started the early double-header against Chelsea and Liverpool, scoring at Stamford Bridge and providing an assist for Phil Foden at Anfield.

Jesus didn’t start a Premier League game for three months after New Year, partly because of injury, but was recalled for the crucial Premier League clash with Liverpool in April and scored the opener.

It’s also telling that as City continued their pursuit of their Champions League dream, he started both semi-final legs against Real, scoring at the Etihad and leading the line in Spain.
Still only 25, Jesus is moving into his prime years and can get even better.

At City, he was always fighting to be in the starting line-up and was never able to truly convince fans that he belonged in the strongest XI.

The move to Arsenal could give him more freedom and the close attention of a coach like Arteta, who knows him well from his time at the Etihad as Guardiola’s assistant, could make him feel even more loved.

Technically, Jesus has everything in his game to be a star: quick feet, pace, strength, good movement and the ability to play either side.

On top of that, he has the experience of working in a winning environment and he can bring some of that mentality to the Emirates and thrive in a hungry, young squad.
While City would have been happy for Jesus to stay, his departure is a result of that aforementioned inability to nail down a set starting role.

While the depth of Guardiola’s attacking options has played a part, a lack of confidence has also been a contributing factor, with Jesus sometimes struggling in front of goal.

“I want to shoot myself in the head,” he said in 2019 when asked about missing chances, and it’s a problem that persisted throughout his time at City.

His goals often come in streaks, with six of last season’s tally arriving in three games at the end of April, after netting just twice in his previous 20 appearances.

He has also felt that pressure to be prolific for Brazil, particularly after failing to score at the 2018 World Cup, and his recent goal against South Korea was his first for his country in 10 games.

The hope will be that near-guaranteed first-team football will give Jesus the confidence and consistency he needs to prove himself a reliable goalscorer.
Still, the big question mark hanging over Jesus’ head pertains to his position: What exactly is his best role?

At the start of last season, he wanted to play as a winger but City’s failed pursuit of Tottenham’s Harry Kane meant he often started as a No.9.

Certainly, he started the season well on the right-hand side of the attack but, as the season progressed, he looked more comfortable back playing through the middle.

While Guardiola was perhaps grateful for the flexibility, Brazilian boss Tite has been frustrated by not knowing how to use Jesus most effectively.

If Jesus is to become the major influence that Arteta hopes he will be, the Gunners’ first task is figuring out where he would be best deployed on a regular basis.

Do that, and Arsenal will have a sensational player on their hands.
(Goal)

55 Bag First Class in India, 20 in Sudan, as Sokoto Declares Emergency on Education