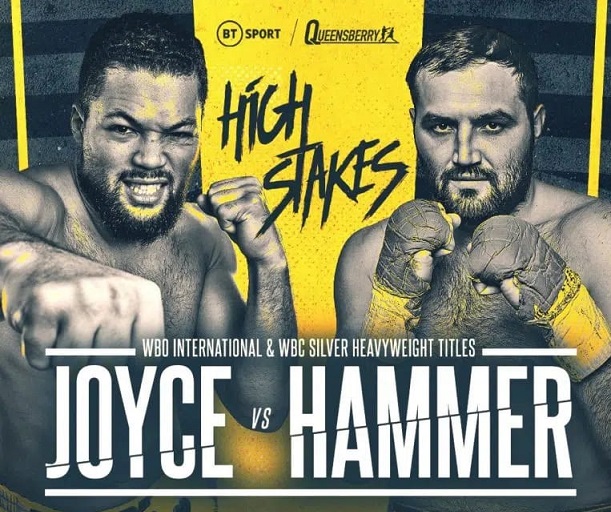 NEXT Saturday night undefeated highly ranked heavyweight contender Joe Joyce will be in action in a 12-round headliner against veteran Christian Hammer at the Wembley Arena in London, England.

Joe Joyce who is currently number 1 WBO, and number 2 WBC, had been in negotiations with former WBO champion Joseph Parker, but that match fell through.

Instead of Joyce getting Parker, he’ll be facing the 34-year-old journeyman Hammer (27-9, 17 KOs), who will be coming in on three weeks’ notice. It’s not the ideal situation for Parker, Hammer, or the fans that will be tuning in to watch the card, but that’s how it goes.

Hammer has lost three out of his last five fights and looking a little past it. And Joyce is coming off an 11-month layoff since his win over Carlos Takam in July of last year. That’s a huge period out of the ring for a fighter Joyce’s age, and he’s going to have to stay busy if he doesn’t want to wreck his career.

More boxing gist is that of Derek Chisora and Kubrat Pulev. The duo went back and forth with trash-talking in their face-off with Matchroom Boxing promoter Eddie Hearn to discuss their rematch on July 9th at the O2 Arena in London.

This rematch is pointless because Pulev soundly beat Chisora six years ago, and there’s no need for a second fight other than for business purposes. Chisora hasn’t won a fight in three years since 2019, he looked like an old man in need of a good bench to rest on in that fight, and the only reason he wasn’t knocked out is that Parker lacks the killer instinct.

Bam’ Rodriguez yesterday night was at his best. That he was crowned as the youngest World champion in the sport in February when he landed the WBC strap as a late replacement in San Diego against Mexican king Carlos Cuadras and now fighting at home for the first time in four years, to face the stiffest of tests and to win in front of his home fan the form of former World ruler Rungvisai is the juiciest.

In the co-feature, WBA and IBF World champion Murodjon Akhmadaliev of Uzbekistan stopped WBA No. 1 ranked Ronny Rios of California in twelve rounds.