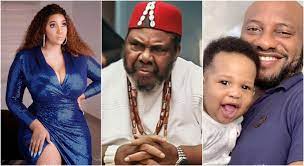 Recall that Nollywood star, Yul Edochie had sparked controversy on 27th April 2022 after announcing his new baby with his side chick turned second wife, Judy Austin.

His brother had revealed the family stance on the actor’s decision, with no reaction from the actor’s father.

However, in the recent video that surfaced online captured the moment Pete Edochie met with the 1-year-old grandson, who paid a visit to his grandfather’s house with his parents.

In the video, Pete Edochie was captured holding onto his grandson, praying for him.

The actor was also heard at the background communicating with his dad.