Challenges in Conservation and Preservation 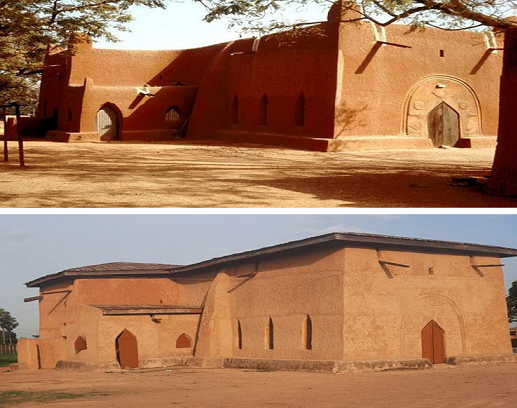 – Hausa adage meaning: Whatever is considered valuable is to be seriously looked after

At any given moment in Nigeria, a National Monument is so declared by the highest office. The earliest of such was the 50-feet high Gobirau Minaret of Katsina by the Governor-General of Nigeria, Sir James Robertson (1899-1983) in 1957. It’s construction was started by the Habe monarch of Katsina, Korau during his reign 1398-1408 AD and finished in the early 1700s.

Other National Monuments are:

The old Zaria Central Mosque was declared a National Monument in 1964. The old Wusasa Church, St. Bartholomew’s currently in its 93rd year of existence was so declared by President Goodluck Jonathan 50 years later in 2014.

There is a fundamental challenge in preserving architectural heritages in Nigeria. Such is clearly discernible in Wusasa over the years.

As can be seen in the attached pictures, the actual materials originally used, their composition and mix in the construction of our heritage building over time have been prone to, “physical, chemical, and biological decay caused by changes, wind, rain, and anthropogenic activities. Other causes of damage include salt, fire, microorganisms, and insects. The effects of these agents of deterioration are manifested as cracks and bulges; patina, surface, and basal erosion; crust formation; and fragmentation.”

The corrugated roof was introduced by Dr. Stephen Kitchener about 20 or so years ago to save the vaulted domes cover from total ruin due to the accumulated effect of perennial rainfall over the decades until a sustainable conservation strategy is articulated.

What is the way forward for us?

Since traditional remedial and other ad-hoc measures have often so far monumentally failed to address the aforementioned issues  there is an overwhelming need for the application of other innovative methods in conservation. Now, there has to be a more technologically enhanced approach.

There is also need for more and careful understudy, widespread consulting including cross fertilization of ideas and capacity building with those that know better in such best practices. This cannot be overemphasized.

It is a rare honour and singular priviledge to serve alongside all of you in this noble venture and onerous endeavor of embarking on restoring the original ambience, pristine quality and inherent beauty of our heritage. Including reinventing the notably missing landscaping of yesteryears.

Sarkin Wusasa, Engr. Isiyaku Yusufu and Dr. Muazu Maiwada also deserve special mention for their tremendous resourcefulness. Also worthy of mention is the quantum of rich archival material gathered by Malam Garba Adamu on traditional Hausa architecture in general even from as far as, Niger Republic.

“Wusasa was the first Christian community of northern Nigeria arisen from inside a Muslim walled city, Zaria. Several of the first generation Zaria Christians became firsts in the professions.

Wusasa produced the first qualified pharmacist and pediatrician from the North, the first physician, Dr. Barau Dikko a founder member of the, Northern Peoples Congress, the first Nigerian Vice-Chancellor of the, Ahmadu Bello University, the Pro-Chancellor of the, University of Lagos, Malam Nuhu Bayero and first female commissioner, Dorothy Miller (1967-75 in the former North Central now Kaduna and Katsina States).

In later years it is to produce the most celebrated of Nigeria’s military commanders.

To describe Wusasa is to talk about a closely-knit intermarrying community who became part of the Nigerian elite, the New Nigerians. They joined a Christian elite that had formed in the South during the nineteenth century so well described by Professor Jacob Ajayi in his, Christian Mission in Nigeria: 1841-1891.

What bound them together, whether Hausa, Tiv or Angas was their schooldays. They had passed through, married into, or were in some way associated with, an African imitation of an English public school, St. Bartholomew’s. ”

Before any iconic building is declared a National Monument there are stipulations which must include;

“A formal application written to the President, Federal Republic of Nigeria seeking approval to declare such an identified building as a national monument.

For any such building to be identified and declared a national monument, it must pass through identification and proper documentation which should be pictorial, descriptive and absolutely justified as meeting the set criteria.

Finally, on the date that the President signs the document into Law it becomes the date of the declaration.”