What happens when people are denied abortions? 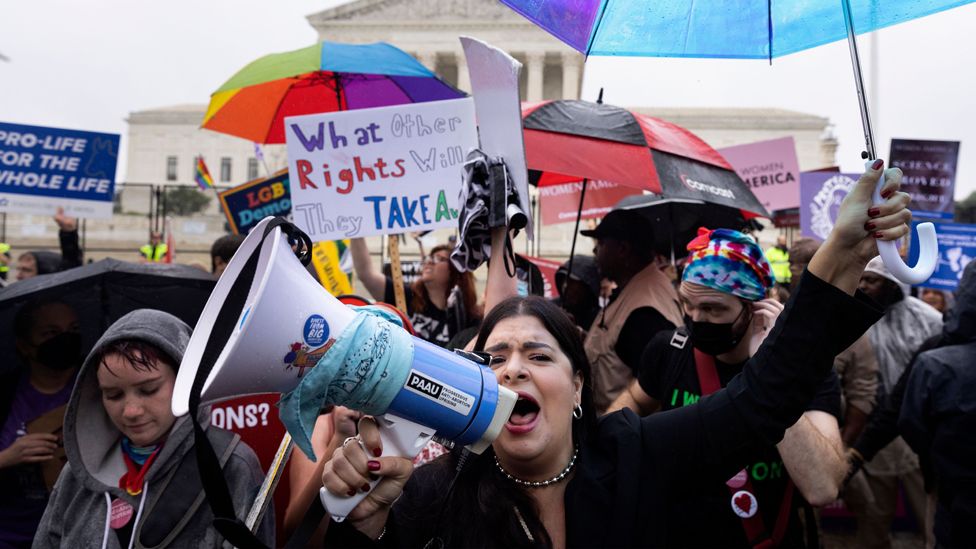 When Ann walked into her doctor’s office six years ago, she expected to schedule an abortion. Instead, the college graduate in her early 20s learned she was between 23 and 25 weeks pregnant. With California’s cutoff set at about six months, she was turned away.

Ann had been taking Depo-Provera, a birth control shot, every three months. But she had recently started a new job and delayed getting the next shot until her benefits kicked in. She gained some weight, but explained it away.
“I was told flat-out that there was no other option,” Ann, whose name has been changed for privacy reasons, told Al Jazeera. “I remember crying, gasping. It was such life-changing news that I was not expecting to get.”

Without access to the abortion she wanted, she carried the pregnancy to term. At eight months, she developed severe eclampsia, experienced seizures, and nearly died.

“I woke up three days later in the ICU,” she said. “I ended up having an emergency c-section.”

On Friday, the US Supreme Court struck down Roe v Wade, the landmark decision issued nearly a half-century ago that guaranteed a constitutional right to abortion. Ann decided to share her story because she knows her experience is about to become more common.
“Where we’re going as a country with abortion access,” she said, “there’s going to be more people like me.”
Life-threatening complications
The Supreme Court’s ruling removes the federal right allowing states to set their own abortion laws, with about half of US states expected to ban or restrict abortion in response. People in restricted states will either have to scramble to find abortion pills that can be used early in a pregnancy, or travel long distances – across state lines or international borders – to access the procedure.

Those who cannot access abortion will be forced to carry unwanted pregnancies. Experts say the bans and restrictions will most severely affect young, low-income people of color, who already face barriers in accessing contraception and abortion.

The denial of abortion services can lead to serious potential harms for the affected women, including economic hardships, a higher likelihood of staying in contact with a violent partner, and more serious health problems, according to a study conducted at the University of California, San Francisco.
Two of the study participants died during childbirth after they were denied abortions because they were over the gestational limit of the facility where they sought care.

“They were denied abortions because they showed up too late,” Diana Greene Foster, a UCSF professor and lead author of the study, told Al Jazeera. “One died of eclampsia and the other one of an infection. Both of them were young, in their 20s, and one of them had kids before.”
The study, based on interviews conducted over a five-year period ending in 2016, followed 1,000 women from clinics in 21 states. Some received abortions and others were turned away, and the study chronicled the way their lives consequently diverged.

Women who were turned away and went on to give birth had an increase in household poverty. Years after being denied an abortion, they were more likely to not have enough money to pay for food, housing and transportation. They also had lower credit scores, higher debt, and an increased likelihood of bankruptcy and eviction.

The study also pointed to myriad health consequences for women who were denied abortions, from being more likely to stay with a violent father, to suffering life-threatening complications such as eclampsia and postpartum haemorrhage. Black and Indigenous women face a heightened risk, with a mortality rate two to three times that of white women.

The children of mothers who were denied abortions were also negatively affected, both from a financial and a developmental perspective, the study found.

“When people receive an abortion, they set more aspirational plans for the future,” Foster said, noting that access to abortion plays a clear role in whether people are able to achieve life goals, including deciding whether to have a child later under better circumstances.

‘Range of negative outcomes’
With the US entering a new era without a constitutionally enshrined right to abortion, Foster said she felt dread and despair. “Nobody knows yet,” she said when asked what a post-Roe US would look like. “We’re unfortunately about to see what happens.
“It’s clear that some people will carry unwanted pregnancies to term, and it will be the least advantaged who have to do that,” she added. “We will see a deepening of economic inequality, where wealthy women and middle-class women scrape everything they have together to get an abortion somewhere else, and other people cannot.”

Foster said she was setting up another study to follow people affected by the outcome of the court decision.

According to Elizabeth Nash, a state policy expert at the Guttmacher Institute, there are about 36 million women of reproductive age living in the 26 states that are now likely to ban or restrict abortion.
“It’s not like a light switch,” Nash said of the state bans, which are expected to take effect in the hours, days, weeks and months after the ruling.

“Unfortunately, we may see more situations where people’s life is at risk because they cannot access abortion care,” Nash told Al Jazeera. “There are a range of negative outcomes that we will see as states ban abortions, because they are denying people the ability to make decisions about their lives and futures.”

The court decision will also highlight the lack of US programmes and policies to support pregnant women, she added. At the local level, there are dozens of organizations that can help remove financial and logistical barriers to abortion for those living in restricted states.
Despite nearly dying in childbirth and not being able to go to graduate school as she had planned, Ann believes she had among the best outcomes: She already had a college degree and a family that supported her financially, and she now has a high-paying job. She knows many people won’t be so lucky.

“We are going to be making a lot more women who have this version of motherhood that isn’t really a choice; it’s forced upon them,” Ann said, encouraging others to speak out as well. “I recommend that we do not go down quietly.”
(Al Jazeera)