- Launches book, foundation to cater to the vulnerable 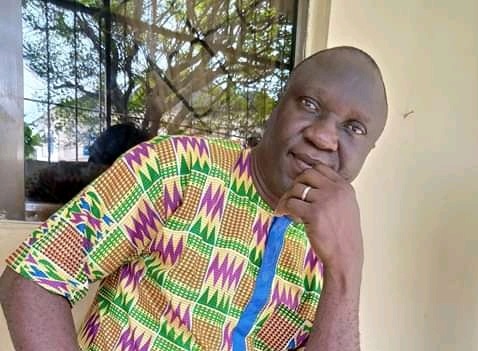 Ade Bada, a vibrant senior journalist who has worked with various National Newspapers, one-time vice-chairman of the Nigeria Union of journalists, Senior Special Assistant to the former governor of Kogi State, Idris Wada, and the publisher, ‘The Public Magazine’ – a community-based newspaper.

He is the immediate elder brother to the Olympic gold medalist, late Sunday Bada.

His life story is full of tales of tragedies, after surviving four fatal accidents, Ade Bada is now blind but not worn out.

The hugely built journalist who said he has been rejected and abandoned by friends, however, now concentrates on his Apostolic calling which he has used to impact lives through organizing seminars, workshops, and counseling, especially for youths and those who have given up on life due to physical disabilities.

Notwithstanding his predicament, Ade Bada managed to write a book on the trajectory that made up his life and how he was able to surmount it. He, therefore, wants the youths to learn a big lesson from it.

He also set up a foundation to raise some funds to give hope to the hopeless, to make them see and maximize their inherent opportunities in their disabilities, and to rekindle their hope for a better tomorrow.

According to him, his passion for the future of the youths and concern about the rate of suicide cases in society, made him set up the foundation through which he hopes to give succor to the vulnerable and make society a better place.

In a chat with our correspondent on how he became blind, he said:

“Well, it all started in 2014 when I noticed a sharp decline in my vision. I went to the Hospital and glaucoma was diagnosed and all efforts to remedy it proved abortive; from one hospital to another they told me the pressure on the eyes was very high and needed to be brought down to guarantee a level, possibly surgery.

“Unfortunately, the more I applied those drugs that were recommended for me, the faster the decline in my eyes. I tried all I could, spending fortunes, but all to no avail but to God be the glory.”

Asked whether at any time he attributes his plight to human wickedness.

“Well, the truth is that I didn’t give that a thought until my consultant ophthalmologist drew my attention to that aspect, using his vast experience as a case study.

“And for me, whatever I have heard as the source of my present predicament, spiritually, is immaterial to me. I am not ignoring the realities of human wickedness, particularly in the traditional African setting. But as a child of God with the knowledge of God, I have deliberately refused to dwell on those possibilities.

“The story of my life has been very turbulent; therefore, I am not ruling out that aspect of human wickedness as the bone of my vicissitudes”

On how he has been coping with his new status.

“It has been so traumatic; indeed, it has been very interesting. In the last six years of my practical incapacitation, I have suffered untold hardship, neglect, abandonment, deprivation, and even isolation.

“Infact, it has been a traumatic experience. I have seen the other side of life in its nakedness; I have experienced the reality of life when the tide turns against you.

“As a journalist and a political activist, my phones were always ringing, even up till midnight. I receive an average of sixty calls per day but today, my phone lines are practically dead.

“However, the joy and my consolation are that God in His infinite, mercy has not forsaken me. Beyond my wildest imagination, he has not only allayed my initial fears and worries but also raised divine helpers to meet my needs and for this reason, I am particularly grateful to God.”  He added

But do you see your present situation as a reproach?

“Never, by the grace of God, I have a background that has adequately prepared and equipped me for my present travails. I have an advanced Diploma in Theology which gives me insight into the word of God and as such, rather than seeing my present situation as a reproach, I have forged ahead with life with a resilient spirit and sense of optimism.

“As a matter of fact, God has given me the grace and enablement to achieve uncommon feats. For example, I have authored a book that I cannot read anyway that is impacting lives positively. The feedback that I am getting from those that have read my book entitled! Daring the storms has been encouraging.

“The book is the turbulent account of my life, presented in a philosophical and spiritual manner to the public.

Although, the book is highly emotional it is a must-read, particularly for those who are determined to overcome the storms of life.

“As a matter of fact, I recommend it to every family, because like I used to say, nobody prays for storms to come; but the truth is that storms are part of Human existence.

“Also, In December 2020, I and my lovely wife were challenged by the high rate of suicide in the society and we decided to organize a monthly program, known as Tomorrow can still be better.

The program is a counseling and motivational platform, that God has enabled us to use to encourage and reconcile homes.

“We have treated such topical issues such as: “Marriage and matters arising ‘Youth mentality and the realities of the moment ‘When trouble comes and how to cope with stress among others.

It is one program that has engaged me with quite a number of issues to deal with on daily basis.

“Like I told you earlier that God has actually prepared me ahead of my present situation. Until recently, I was an ordained Minister in the Redeemed Christian Church of God.

“However, I have by the grace of God, yielded to my apostolic calling which has brought about the establishment of the Sword of fire Evangelical ministry (SOFEM), where I am currently overseeing as the Presiding Shepherd.

“I am a preacher of the Gospel and God has been awesome, irrespective of my visual challenge. At the moment, God has built for us a Chapel and we have several programs running.”

On what the Ade Bada foundation international is all about.

“Yes, it is as a reaction to the demeaning challenge I have been visited with, and in deference to a resolve to live off disability and catch up with life with the sole aim of encouraging others in such circumstances like myself.

“I have decided to float a foundation known as Ade Bada foundation international I, to operate in support of those incapacitated by the vicissitudes of life like myself.

“I have decided to use this platform to give hope to the hopeless, to make them see and maximize inherent opportunities in their disabilities, and to rekindle their hope for a better tomorrow.

“I have decided to dedicate and live the rest of my life to serving humanity.

Nobody stands to gain anything if Nigeria breaks up — Kukah