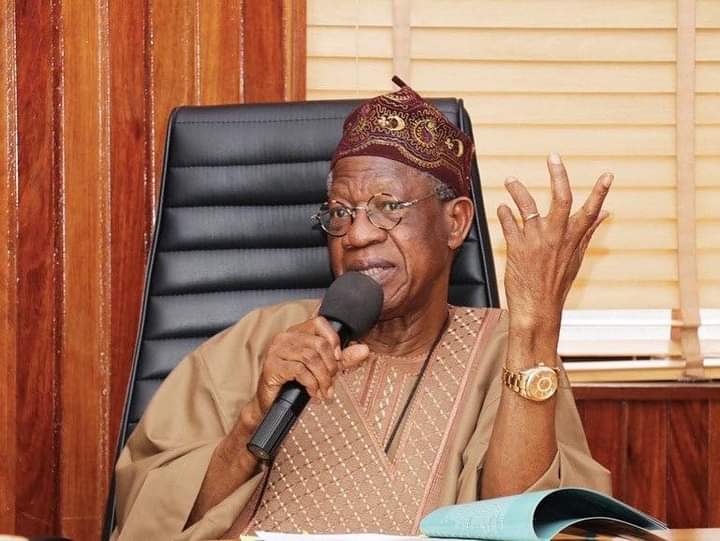 The Minister of Information and Culture, Alhaji Lai Mohamed, has stressed the need for governments in Africa to invest in the Creative Industry as a way to solve unemployment and boost the creative talent of youths.

In a statement, Tuesday, the Special Assistant to the President on Media Segun Adeyemi said the Minister disclosed while briefing journalists on the just-concluded Annual General Meeting of the Afreximbank in Cairo.

He revealed that “Egypt where the Creative Industry featured prominently, said such support should be in form of providing grants for the sector and building Creative Industry infrastructures such as event places, cinemas, internet connectivity, and cheap data”.

The Minister said: “What we find lacking in the Creative Industry is that governments across the continent need to do more than what they are doing now.

“They need to create infrastructure because we are not just talking about roads or bridges or airports but Creative Industry Infrastructure, both hardware, and software.

”We have the population, we have the talents, we need infrastructure, we need government grants in the industry”.

He said with a high population of youths, most of whom are unemployed; the Creative Industry holds great potential for Africa because it’s a limitless and renewable resource capable of creating wealth and employment.

The continental bank has floated a $500 million Creative Africa Nexus (CANEX) Fund designed to boost African Creative Industry and the Media, including digital innovators and experts, in fashion, film, and music.

Alhaji Mohammed said all the available instruments at the moment cannot grow the Creative Industry, and that what is needed is ‘patient money.

The Minister added that, with a population of about 52 million young people (between the ages of 18 and 35), who are hugely talented, and the digital revolution which provides internet access for about 104 million people and also about 33 million Social Media users.

Nigeria’s Creative Industry is like a goldmine and, when properly harnessed, would serve as the country’s new oil.

He expressed delight that Nigeria is far ahead of some of its peers on the continent in appreciating the potential of the Creative Industry and making policies toward enhancing the contribution of the sector to economic growth.

“I am proud to say that when we were in Cairo, I was able to thump my chest and say that Nigeria is doing the right thing.

“One example I cited is the collaboration between the Federal Government and the Central Bank of Nigeria and Bankers’ Committee, which will bring a brand-new National Theatre and also have four hubs for music, ICT, fashion, and film.

“We are creating a creative and entertainment center, which is going to employ many people and stop capital flight because you can now do the post-production for your film and music right here in Nigeria.”

He mentioned the floating of the $50 million Creative Industry Financial Initiative by the Central Bank and promised to engage the apex bank to ensure that the fund is accessible to the Creative Industry players.

He then harped on the need to improve on the collation, analysis, and interpretation of data on the contribution of the Creative Sector to the GDP so that policymakers, development partners, and other experts can make a case for favorable policies and funding for the industry.