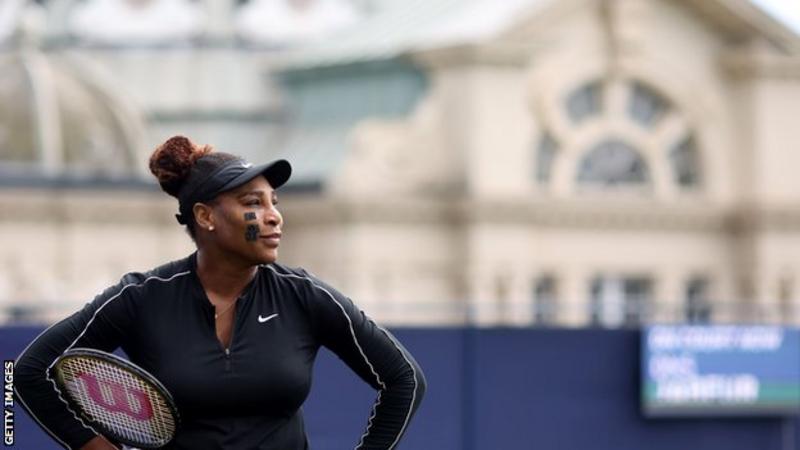 The signs pointed to one of the greatest players of all time slipping quietly into retirement without the farewell she deserves.

But on Tuesday, Serena Williams made her return to the tennis court – almost exactly a year since her last competitive match and just weeks after many had predicted the 23-time Grand Slam singles champion would never play again.

At Eastbourne’s Devonshire Park, usually the hub of the sleepy Sussex seaside town’s cultural scene and home to a number of theatres, Williams took center stage.

The 40-year-old American teamed up with Tunisia’s Ons Jabeur in the Eastbourne doubles and the pair won their opening match in an entertaining evening.

Next week Williams is hoping to play in the singles at Wimbledon, where she has won seven of her major titles.

Afterwards, she said she “absolutely” had moments of doubt about whether she would ever play again.

“You know what, I’m literally taking it one day at a time,” she said.

“I really took my time with my hamstring injury so I’m just not making a ton of decisions after this.”

Why there was speculation she might have quietly retired
In April, when her long-time coach Patrick Mouratoglou started working with former world number one Simona Halep, Williams had not played competitively for nine months.

She was midway through her 41st year. There was little evidence she had even been practising.

Further fuel to the speculation about the American’s future was added by the recalling of her comments at the 2021 Australian Open, where she said: “If I ever say farewell, I wouldn’t tell anyone.”

Later that day, in an Instagram story with NFL star Aaron Rodgers, she casually dropped into conversation she was preparing for Wimbledon.

But, still, the announcement that she was heading to Britain to play – an Instagram post of her feet on the grass with a caption saying “SW at SW19. It’s a date.” – had not been seen as a given.

“It’s very good to have her back and it really amazed me how she had all this hunger for the game and still has it. I think it is a great inspiration.

“I hope she can be back for much more time.”
What has she been doing?
The bio on her Instagram page simply reads: “I’m Olympia’s mum.”

Being a doting mother takes up a lot of Williams’ time these days, but she has also been busy working on her business interests outside tennis.

A clothing line named ‘Serena’ was launched earlier this year, while another part of her fashion portfolio is a jewellery brand.

Earlier this year, she raised $111m to launch a venture capital fund, Serena Ventures, which invests in entrepreneurs from diverse backgrounds.

Asked if she could see herself playing into next year, she said: “I don’t know, I can’t answer that. But I love tennis and I love playing, or else I wouldn’t be out here, right?

“But I also love what I do off the court, what I’ve built with Serena Ventures, it’s interesting. So, it’s a lot.”

How Williams’ arrival left Eastbourne ‘starstruck’
After cancelling a practice session on Monday, Williams arrived at the Devonshire Park practice courts at about 14:30 BST and word quickly spread around the grounds about what was going on.

In a far corner of the site, Williams put on her tennis shoes and stepped on to a court in the shadow of Eastbourne’s theatre hub.

The stage was set – for the rehearsal, at least.

Hordes of long lenses pointed in the direction of Williams. Tons of camera phones were pressed up against the net separating the court from the watching fans.

Jabeur, who said earlier in the week she “didn’t know” why Williams had picked to play with her, turned up shortly after.

The pair had previously “talked a little bit”, added the world singles number three, but “never really about tennis”.

After exchanging a warm handshake and even warmer smiles, the pair limbered up with a gentle knock, practised some volleys and hit some serves before teaming up on the same side of the net for the first time.

The chemistry started to build as they played some points against Williams’ coach Eric Hechtman and hitting partner Jarmere Jenkins.

When the curtain raised for real on Eastbourne’s centre court, the pair also grew in cohesion and confidence.

On why she chose Jabeur, Williams said: “When we saw her name in, it was immediately like, OK, she would be great to play with.

“I love her game, I love her style of play. She has a great volley, clearly has a great drop shot and she has been having a phenomenal couple of years.

“It just made a lot of sense, it was a good solution for me.”

The crowd in Eastbourne certainly agreed. Hundreds stayed until the end of a match that finished at 20:27 local time on a summer evening which had turned chillier as the match progressed

“That was certainly worth hanging on for,” said one ecstatic female fan in front of the media seats. “What a night.”

She wasn’t the only fan pleased with her day out.

As Williams left the practice court, heading back to the Winter Garden which is usually used for cabaret events and conferences, she signed some autographs for a lucky few.
One of them was eight-year-old Eden John, who plays tennis every day at her club in Eastbourne and has pictures on her bedroom wall of Williams.

“You should have filmed my face the first time I saw her!” she said before pulling a face which conveyed how she was mesmerised by seeing Williams in the flesh.

Eden’s dad Andre added: “She was a bit starstruck, she couldn’t take her eyes of her when she was hitting. To see a legend like that in our backyard is incredible.”

Now they will get another chance when Williams and Jabeur return to Devonshire Park for a second act on Wednesday.

The show continues to go on for Williams. But for how much longer? Even she does not know.

“I can’t answer about if I’ll play into next year,” she said. “But I love tennis and I love playing, or else I wouldn’t be out here.”
(BBC)